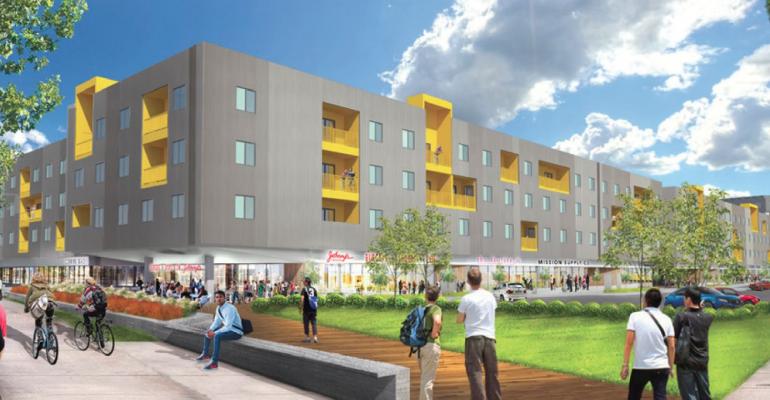 The food hall craze is getting a fine dining facelift in Kansas City.

The sophisticated food hall is part of a 17-acre mixed use The Gateway project that includes residential, a 200-room hotel, office buildings, retail and dining.  The head judge of “Top Chef” and fine-dining restaurateur is partnering with the developers who’ve had trouble getting the project off the ground in recent years.

Colicchio said the dining venue, his first food hall, will focus on exceptional but accessible food by national and local chefs.

“Food halls are extremely popular right now,” he said during a phone interview with Restaurant Hospitality.  “I think it is the future of dining. I thought it was about time we dipped our feet in that pool.” The developers, The Cameron Group and GFI Development Company, said their food hall will take the trend to a different level not seen anywhere else in the country.

Besides experiential dining, the food hall will offer live music, local food purveyors, a demonstration kitchen and recreational activities such as table tennis, billiards, shuffleboard and bocce. It will also likely feature a mix of walk-up counter service restaurants, and dining establishments with table service. It will be connected to a large enclosed entertainment hall that is expected to house a movie theater.

“We think there’s an opportunity to create a different aesthetic so it doesn’t look like a food hall,” said Joel Rosen, managing director of GFI Hospitality, a division of GFI Development.  “What we are creating here is a live work play destination.”

Colicchio’s star power should breathe new life into the 17-acre project, which has run into a few false starts.

“Having Tom Colicchio operating our food hall at The Gateway is a great endorsement of our project,” Tom Valenti, a principal at Cameron Group, said in a statement.

Colicchio was approached by GFI, a firm he previously worked with for a food project at The Beekman in Lower Manhattan.

“They’ve been great to work with. They have a real vision for the space,” he said in between filming for award-winning reality cooking show, Top Chef.

Like Rosen, Colicchio said he imagines Gateway to be a next generation food hall, one “geared for night life” with live music and an active bar program.

Don’t expect a “mish mosh” of walk up counters either, he said. “I’d like to see something more stylized  and uniform.”

He and Rosen are kicking around several other ideas, including have some of the chef-driven brands share a central kitchen.  He also wants to elevate the communal dining setting by creating a GPS-powered app so venues can bring food to you.