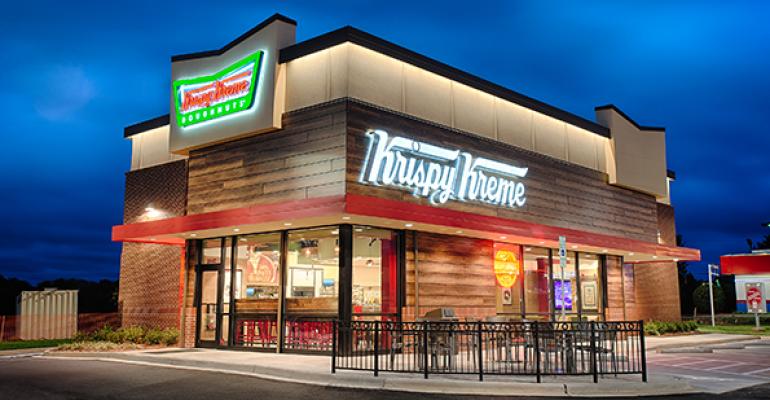 A prototype restaurant incorporates a new layout, a barista and a revamped ordering process

Coffee is a difficult business for a restaurant chain to break into. Just ask Krispy Kreme Doughnuts Inc.

The venerable doughnut chain has long looked to increase its sales of coffee because customers drink coffee a lot more than they eat doughnuts. Yet coffee is only 5 percent of Krispy Kreme sales, even though coffee goes with doughnuts like, well, coffee and doughnuts.

In addition, Krispy Kreme is going to test minor remodels of its counter that executives hope will encourage more coffee sales.

“Coffee is more than just adding it to your menu,” Krispy Kreme CEO Tony Thompson said at the ICR Conference Wednesday. “There are many different aspects of coffee to the experience. We’re going to focus on enhancing the overall customer experience.”

There’s been pressure on Krispy Kreme to sell more coffee at its shops for years, especially as competitors — notably Dunkin’ Donuts — have shifted from doughnuts to more beverages over the years.

Thompson said that years ago, Krispy Kreme had been making some progress in selling more coffee. But then the company started having some problems beginning in 2004. Sales fell dramatically, the company missed earnings estimates and franchisees shut down locations.

As that was happening, the company focused more on staying afloat than on selling more coffee. “We went into survival mode,” Thompson said. “No investments were made, and resources were depleted.”

As a result, he said, “Coffee just passed us by.”

While it’s traditionally difficult for chains to break into the breakfast daypart, Thompson is convinced he can convince customers to buy more of the chain’s coffee. And once they try it, they’ll be more likely to get it again. “People will try other coffee,” he said.

The new location is designed to encourage cashiers to sell more coffee, making the coffee more prominent and “engaging other senses” by grinding coffee, for instance. The atmosphere aims to be more inviting and more welcoming for customers to linger and do homework.

The remodel will be tested in two locations before it’s expanded to other locations afterward.

The redesign is a simple counter reorganization, and Thompson said the company could make the change relatively quick once it starts. The remodeled counter, which shifts the doughnut case and changes the ordering process, will be available in the 70 Krispy Kreme retail shops that don’t make doughnuts for the company’s consumer packaged goods business.

The goal, Thompson said, is to double beverage sales. “Imagine if you could go from 5 percent to 10 percent coffee,” he said. “That would be meaningful to the bottom line.”

Thompson said Krispy Kreme plans to “push the envelope” on coffee, and could imagine other locations employing baristas, although that will depend on whether the location has potential to sell a lot of coffee.

And Krispy Kreme has been careful not to go too far and change its identity with its remodels.

The classic white hats are still available, and the glaze waterfall is still on display.

The goal, he said, is to get doughnut-loving customers to order coffee, adding incremental sales that leverage existing labor costs and other expenses. “This just opens up a big revenue stream.”

Thompson, however, was quick to dismiss any suggestions that Krispy Kreme needs this to further its expansion. The 1,100-unit chain is performing fine, he said, and franchisees in the U.S. are rapidly building more retail shops. Domestic franchisees operate 180 locations, in addition to the 120 company-operated units. Thompson believes that the new retail model will continue to be successful.

And the company’s international business remains on a strong growth trajectory. Krispy Kreme has more than 800 locations outside the U.S. that do $500 million in annual system sales, and it’s adding 100 new international locations every year.