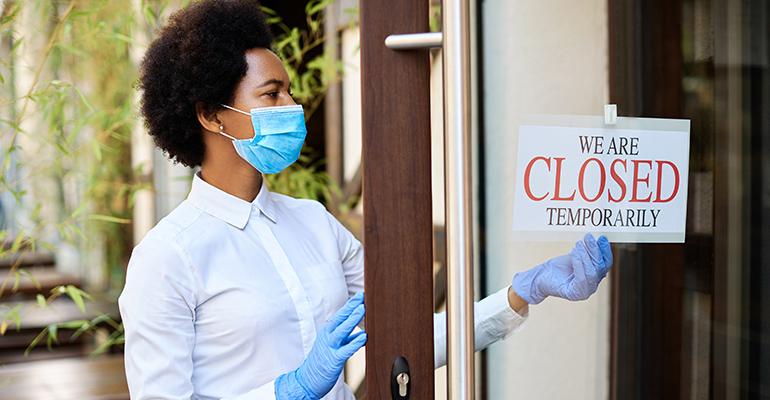 Drazen Zigic / iStock / Getty Images Plus
About three in 10 restaurant operators — 29%— said they do not expect their business to return to normal levels for least a year, and another 32% said they believed it would be seven to 12 months before business returns to pre-pandemic levels.
Operations

About three in 10 restaurant operators — 29%— said they do not expect their business to return to normal levels for least a year, and another 32% said they believed it would be seven to 12 months before business returns to pre-pandemic levels, according to in a survey by the National Restaurant Association Research Group.

The survey of 3,000 restaurant companies took place in early February and was the seventh in an ongoing series that seeks to gauge the economic impact of the COVID-19 pandemic.

In addition to the majority of operators who said it would take seven months or more to recover, another 10% said they did not expect that their sales would ever return to normal levels. Additionally, 14% said their business will “probably” or “definitely” close within the next three months without assistance from the federal government.

“Until we get real change in consumer confidence, and until we see changes from our governors allowing us to operate at a higher capacity for indoor dining, until we get more people vaccinated, and until we get some relief, it’s very uncertain,” said Sean Kennedy, executive vice president of public affairs at the NRA.

Many operators that had tried to make their restaurants viable by adding outdoor dining capacity have struggled to stay afloat during the winter months, Kennedy said, which has contributed to the bleak outlook for the industry.

The survey found that, as of February, only 40% of operators were offering on-premises outdoor dining in a space such as a patio, deck or sidewalk — down from 49% in November and 67% in September.

The survey found that, although many restaurants added back employees after the initial lockdowns, overall staffing levels remained well below normal. Eighty percent of operators said their current staffing level was lower than what it would normally be in the absence of COVID-19. That included 86% of full-service operators and 73% of limited-service operators.

Total sales down 26% in January

Seventy-seven percent of restaurant operators said their total dollar sales volume in January was lower than it was in January of last year. Only 13% reported higher sales in January 2021, while 10% reported sales volume that was about the same as a year ago.

The data highlighted the particular challenges faced by the restaurant industry, even as other retail businesses rebound, Kennedy said.

“For a lot of business models, there may be plexiglass at the checkout, but it doesn’t change the fundamental way they do business,” he said.

Kennedy said the surveys have attracted strong interest from government leaders seeking to apportion relief funds to help restore the economy. In fact, data from the latest survey was attached to a letter sent to the White House and congressional leaders highlighting the association’s support for the $25 billion Restaurant Revitalization Fund in the American Rescue Plan. The White House subsequently issued a press release of its own amplifying the association’s position.

“We are going to continue doing this, because the need is not going away anytime soon,” Kennedy said.

Among other findings from the survey:

• 93% of operators said they plan to continue offering alcoholic beverages for off-premise consumption if their jurisdiction continues to allow it after the coronavirus crisis is over.

• 75% of operators said their restaurant business made a charitable contribution of some kind since the COVID-19 outbreak in March 2020. Among these operators, 81% donated food, 55% made in-kind contributions, 51% donated cash, 22% donated space, and 12% allowed their staff to volunteer on company time.