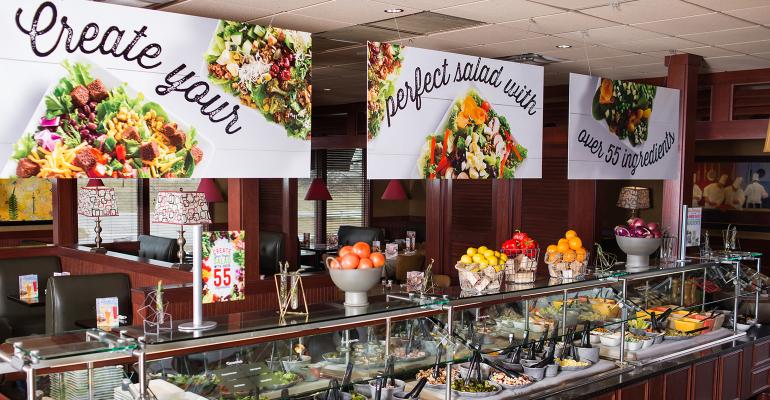 CMO David Skena outlines the operator’s road to the revamp

Ruby Tuesday Inc. CMO David Skena is shedding light on the casual-dining chain’s path to upgrading is signature Garden Bar after more than a year in test.

The Maryville, Tenn.-based operator rolled out the revamped Garden Bar on Jan. 17, after smaller market tests showed it was an important brand differentiator. “The Garden Bar is really the cornerstone of where we want to take the brand and where we want it to be in the lives of our guests,” Skena told Nation’s Restaurant News. “We can be a restaurant concept with better choices on the menu for people to make. We love having the grill-and-bar menu, but we can be more.”

Skena said the customer response has been very positive, but the executive team was unsure when it first tested the upgraded Garden Bar in November 2015.

“We did a single-unit test near our headquarters, sort of as a proof-of-concept test to see if we could pull it off,” he explained. The company then did a full-market test in Atlanta in early 2016, and expanded it to St. Louis and Charlotte, N.C., in May.

“Altogether, we had a million visits to the Garden Bar,” Skena said. “But in each market, we would vary a price point or vary a selection. By the end of it, we had the ‘Goldilocks Garden Bar’ — it was just right.” In surveys of more than 6,000 customers, Ruby Tuesday found that 84 percent of Garden Bar users visited specifically because of that offering, Skena said, adding that close to half of all Ruby Tuesday customers get the Garden Bar.

“It’s a critical part of the restaurants,” he said.

Labor was a chief concern in rolling out the Garden Bar systemwide, as were some increased food costs, he added.

“You have things like artichoke hearts that weren’t there before,” he said, adding that other items include spicy roasted broccoli, pico de gallo, banana pepper, wasabi peas and candied walnuts.

“It’s not that our Garden Bar before didn’t have all the basics that you needed to make a good salad, but this takes it up another notch,” he said.

And because many products are now made in house, labor costs were also a factor in the rollout, Skena said.

“You are making your dressings in house, hand-squeezing the lime juice. It takes time,” Skena said. “That’s for all eight of the dressings, so it has to be done right. It was finding the balance between things that delight the customers and things we could prep right.” Capital costs for the Garden Bar rollout were minimal.

“It required some small stuff, minor things,” he said. “We needed to update some small wares.”

With each layer of the tiered test last year, the company conducted customer satisfaction surveys, especially to get the pricing correct, Skena said.

“We make sure we are sensitive to our target customers,” he said.

The company ended up getting rid of the free side substation of the Garden Bar in favor of an upcharge. Reactions varied by competitive geography.

“We know moms want better, more healthful options,” Skena said. “They want to be at place where they can make good choices. That’s a real feather in our cap.”

Ruby Tuesday is marketing the new Garden Bar through traditional television ads and billboards, but is layering on other media as well, such as a storytelling video called “Shy Girl” on YouTube, Skena said.

As of Nov. 29, Ruby Tuesday owned or franchised 613 Ruby Tuesday restaurants in 42 states, 14 countries and Guam.