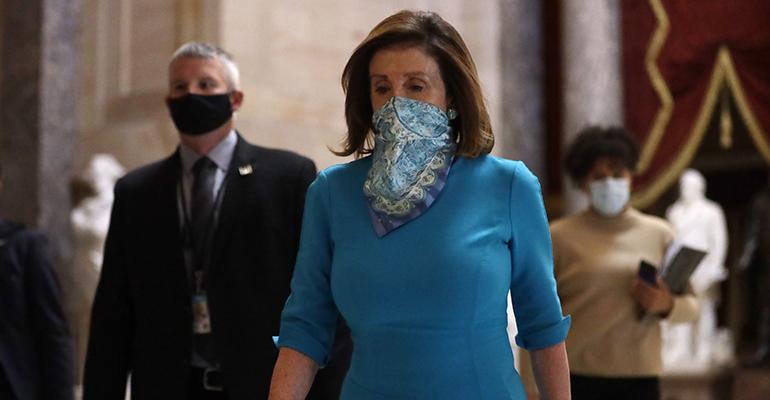 House Democrats propose next coronavirus relief bill, seeking $3 trillion for states and local governments to provide another round of stimulus

Setting up the next bipartisan battle, House Democrats on Tuesday proposed what would be the fifth federal coronavirus relief bill seeking more than $3 trillion in a package that would offer more direct payments to families, extend unemployment benefits and enhance the Paycheck Protection Program.

Dubbed the Health and Economic Recovery Omnibus Emergency Solutions, or HEROES, Act, the bill would include nearly $1 trillion for state, local, territorial and tribal governments to pay first responders, health workers and teachers, as well as create a $200 billion fund for essential workers to receive hazard pay.

Though the bill was expected to be voted on in the House this week, Republican leaders pronounced its early demise, reportedly describing it as a liberal wish list that had no chance in the Senate.

Senate Majority Leader Mitch McConnell tweeted his support for legal liability protections for businesses as they gradually reopen after weeks of shutdown.

Saying Republicans are preparing a “major package” of COVID-related reforms, McConnell tweeted, “If we want American workers to clock back in, we need employers to know they will not be left to drown in opportunistic litigation.”

More than two-thirds of independent business owners say they are worried about a legal liability minefield getting in the way of re-opening. The Senate majority is not going to stand idly by and let trial lawyers vacuum up relief money & redirect it into their own pockets.

The House bill, however, includes a number of provisions that would benefit restaurants, including a second round of $1,200 checks to soften the economic impact of the coronavirus crisis. It would also extend the additional $600 per week in unemployment benefits for laid off workers through January. The program currently is scheduled to expire at the end of July.

Restaurants and bars lost an estimated 5.5 million jobs in April as a result of coronavirus, according to data from the Labor Department released last week.

The HEROES Act also seeks to enhance the employee retention tax credit that encourages employers to keep workers on the payroll. It would also provide another $10 billion for emergency grants to small business through the Economic Injury Disaster Loan program, or EIDL.

Perhaps most importantly, the proposed bill would make some fixes to the PPP loan program, which industry groups have pushed for in recent weeks.

Under the current PPP, employers face a June 30 deadline to rehire workers to earn loan forgiveness. The bill would push that deadline to Dec. 31.

It also proposes carving out 25% of existing funds on the date of enactment specifically for small businesses with 10 or fewer workers and sets aside more funding specifically for community banks that tend to work with mom-and-pop operators.

The Independent Restaurant Coalition, which has been lobbying for changes to the PPP program, in a statement welcomed the fixes but said more work needs to be done. The group is asking Congress to create a restaurant-specific stabilization fund, arguing that the industry has been among the hardest hit during the crisis.

“The PPP remains an eight-week Band-Aid for an 18-month problem overwhelming independent restaurants, who face nearly insurmountable odds as they meet new requirements for public safety. They will incur new expenses for necessities like protective items and heightened cleaning protocols, while modifying dining rooms to reduce seating will cause independent restaurants to lose up to 50% in revenue if they are able to reopen at all.”

UPDATE: This story has been updated with additional information about the PPP enhancements.