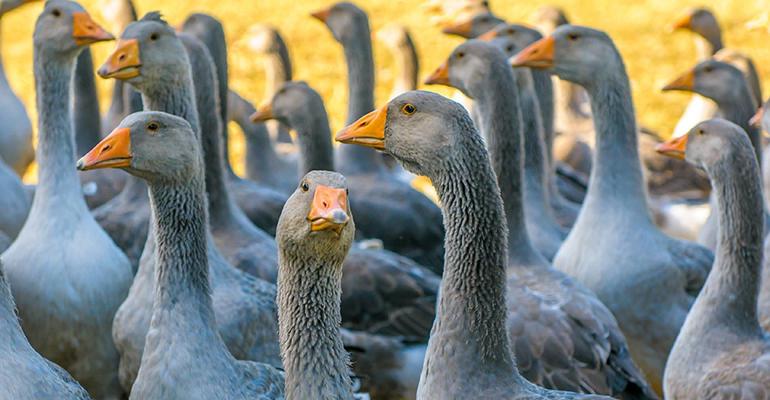 Javarman3/iStock/Getty Images Plus
Foie gras, banned in California since 2012, can now be shipped into the state.
Operations

Foie gras can be shipped to California once again

The battle over foie gras in California continues eight years after production and sale of the fatty poultry liver was banned in the state, as a district court ruled Tuesday that shipment of the delicacy from out of state is allowed.

Stephen Wilson, U.S. District Judge for California’s Central District, said in his judgment that, although products that are “the result of force feeding a bird for the purpose of enlarging the bird’s liver beyond normal size” cannot be sold in the state, according to the California Health and Safety Code enacted in 2012, that code doesn’t define what it means by “sale.”

“Rather than broadly determine how sale is defined in reference to [the health code], the Court’s focus is on whether the specific factual scenario presented by the Plaintiffs falls within the grasp of the regulation,” Wilson said in the ruling.

Those plaintiffs are American and Canadian producers of foie gras, which is made by engorging the livers of ducks or geese. The plaintiffs include Hudson Valley Foie Gras in New York State and an association of Canadian foie gras producers, who sued California claiming the foie gras ban had resulted in a loss of nearly one-third of their total sales.

Wilson said the health code, while banning the production and sale of foie gras, “is silent as to the possession, importation, or receipt of foie gras within California.”

He said that other aspects of the California Health & Safety Code, such as one that relates to pig products, “specifically states that ‘[f]or purposes of this section, a sale shall be deemed to occur at the location where the buyer takes physical possession of an item.’”

Since there was no such language in the foie gras ban, Wilson said he inferred that it was not intended “to be expansively read beyond the traditional understanding of ‘sold in California.’”

In other words, the foie gras can be purchased online and shipped to consumers in California, provided certain conditions are met.

Further, Wilson said that then-state senator John Burton, who authored the bill, and then-governor Arnold Schwarzenegger, who signed it into law, said that the code was not intended as a total ban on foie gras.

“Rather, both the legislative and executive branches indicated that the focus of the bill was to prevent the cruel practice of force-feeding within California.”

Foie gras producers have long-disputed the argument that force-feeding ducks and geese, a practice that dates back to ancient Egypt, is cruel.

Sale of foie gras in the state, including by restaurants, is still banned, but online and telephone sales are now permitted provided the following condtions are met:
·  The seller is located outside of California,

·  the foie gras being purchased is not in California at the time of sale,

·  the transaction is processed outside of California (via phone, fax, email, website, or

·  payment is received and processed outside of California, and

The Catskill Foie Gras Collective, a consortium of duck farmers in New York and Canada, hailed the ruling.

“We are gratified that the Court recognized that California’s misguided ban was never intended to apply to foie gras products from out‐of‐state producers that are shipped to happy consumers in California,” said Marcus Henley, vice president of Hudson Valley Foie Gras in Ferndale, N.Y.

Nikola Smatrakalev, general manager in Canada for French foie gras producer Rougié, noted that the date of the ruling was significant as foie gras is recognized by French law as part of the country’s cultural heritage.

“This is a very welcome decision by the Court on Bastille Day [July 14], France’s National Day,” Smatrakalev said.

“This victory is symbolic that even in the most trying times, if we stand together, we will persevere,” he said.

Californians have long worked to skirt the ban of foie gras sales. Some restaurateurs have done so by giving it away, something Chicago chefs also did when foie gras was briefly banned in that city.

Ken Frank, chef-owner of La Toque in Napa, Calif., was sued by the Animal Legal Defense Fund for that practice, but the suit was dismissed last year.

Although the new ruling clarifies that Californians can take possession of and consume foie gras, it's still illegal for restaurants to sell it.

The Catskill Foie Gras Collective is also fighting a law passed by the New York City Council last year that bans the sale of foie gras in the city. That law is scheduled to go into effect in 2022.

This story has been updated with more details about what is required to sell foie gras in California. It also clarifies that California restaurants still are not allowed to sell the product.
TAGS: Food Trends
0 comments
Hide comments
Related
Sponsored