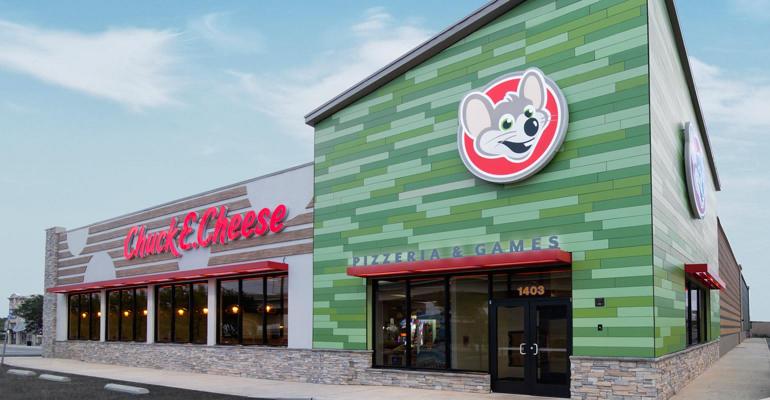 A remodeled Chuck E. Cheese unit in San Antonio, Texas, representing the "gold" package. The next 25 remodeled locations will have variations of this package.
Operations

“We’re aware that the cheap real estate from many retail and restaurant store closures has facilitated the quick entrance of new kid entertainment competitors like bounce houses and trampoline parks,” said Tom Leverton, CEC CEO, in a call with restaurant analysts Wednesday.

“A lot of these bounce houses and trampoline parks, they are mom and pops,” he said, “so you do see them pop in and then pop out, and we can measure same-store sales at that local level.”

CEC has several initiatives in place to combat the increased competition, Leverton said, including seven reimaging tests in San Antonio, Texas, and Kansas City, Mo., which have produced strong results.

“As a result, we plan on reimaging another 25 centers to this model,” Leverton said. Those remodels will be spread in various locations nationally in fall 2018 and early 2019, he said.

The sales lift at the remodel stores has been large enough, said Dale Black, CEC chief financial officer, “that we want to push it forward.” CEC has tested three levels of reimaging in the seven stores so far and is working on value-engineering of the plan for the next 25 locations, he said.

Leverton said the next reimaging will be spread out in “onesie-twosies” where the company sees the best opportunities for sales gains.

CEC also introduced new birthday packages in the first quarter with customized themes and time-based play on the arcade games instead of traditional token or point-based play, he said.

The time-based play is being piloted in 40 locations, he said, which allows guests to buy cards for unlimited play in designated periods.  “This test has proven very popular with guests,” Leverton said, “and we will expand this test to an additional 26 stores by next week.”

For the fourth quarter, CEC swung to a profit of $52.9 million from a loss of $10.1 million in the prior-year period on income tax benefits. Fourth quarter net income was positively impacted by a $66.6 million adjustment in deferred income tax liability related to recent federal tax law changes. Before that adjustment, the net loss was $13.7 million. Revenues fell 3.9 percent to $196.7 million from $204.6 million in the same quarter last year.