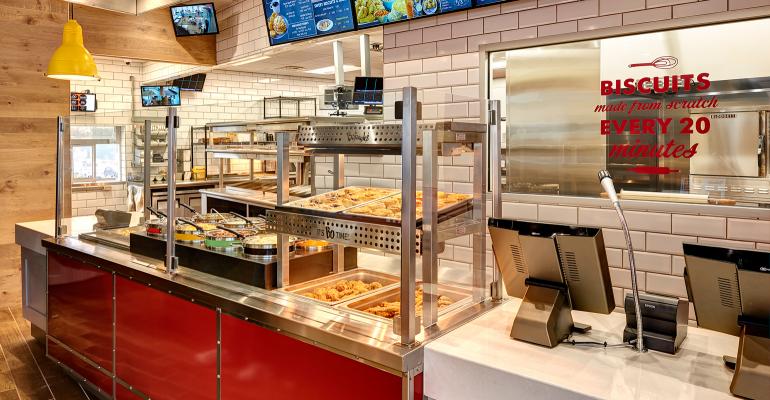 Bojangles’ Inc. is working to reduce costs in the prototype restaurant it debuted in January, and is finding that it’s leading more customers to dine in, executives said Tuesday.

“We are gathering a significant amount of helpful data and experience from the Greenville [S.C.] location,” said Clifford Rutledge, president and CEO of the Charlotte, N.C.-based company, in a first-quarter earnings call. “We continue to test critical aspects of the new design.”

The second “Bojangles’ of the Future” prototype will open soon in Charlotte, he said, but some aspects are being incorporated into ongoing restaurant remodels.

The remodeled restaurants incorporate such features such as the Biscuit Theater, colored crocks instead of still warming trays on the front line, and an improved tea-line preparation area in the back of the house, he said.

Bojangles’ is also looking at ways to reduce costs in the new restaurant, Rutledge said, and taking time to value-engineer the construction.

“We found a lot of different elements — whether it’s the type of tile, or the type of flooring, or those type of things — that we can take off,” he explained. “We’re also taking a look at the size of the building to see if we can take some square footage out of it.”

Rutledge said a smaller restaurant might work better for rural markets. The cost of remodels is generally in line with those of the past, he said.

“We’re going to do everything we can to knock as much of the cost out of that, so that is somewhat equal,” Rutledge said.

Early results from the Greenville restaurant, which has been open three months, shows that the unit is increasing dine-in customers without reducing the number of people using the drive-thru, Rutledge noted.

“We’re getting more people inside the building, especially like on a Sunday after lunch,” he said, adding that customers apparently are attracted to elements such as the new seating and charging stations for electronic devices.

Bojangles’ is also in the process of introducing smartphone apps for loyalty and payment, Rutledge said.

The company plans to have app-based large order capabilities in August or September, he said.

“We’ve got to make sure that we’re prepared for that, so that when that happens that there’s not a hiccup inside the restaurant,” he said.

Systemwide same-store sales decreased 1.7 percent, with a decline of 3.5 percent at company-owned restaurants and a drop of 0.5 percent at franchised units.

As of March 26, Bojangles' had 728 restaurants, primarily in the Southeast. Of those, 314 units were company-owned and 414 locations were franchised.

For fiscal 2017, Jordan said, Bojangles’ projects a net increase of 49 to 54 restaurants, including 19 to 20 company units and 30 to 34 franchised locations.