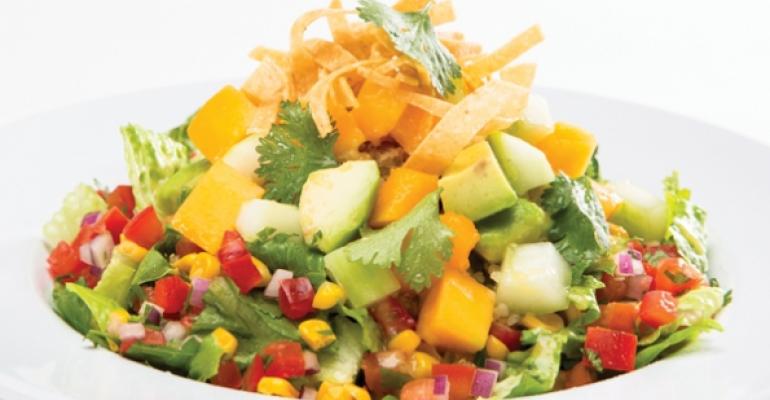 Veggie Grill has a bold mission — to help vegetarian cuisine shed its reputation as bland, “hippie” food and gain favor even among the meat-loving masses.

But the chain is making headway, having grown to 16 units since it was founded in 2005. In addition, the conditions are right to make an even bigger impact, according to Greg Dollarhyde, the Santa Monica, Calif.-based chain’s chief executive.

“The overarching trend in America today is, ‘Give me better quality, better-for-me food that has more nutrients, but I don’t want to give anything up,’” Dollarhyde said. Veggie Grill meets that need, he continued, by offering healthful, affordable dishes that are “very familiar, very craveable.”

Dollarhyde, a former executive at Zoës Kitchen and Baja Fresh Mexican Grill, among others, joined Veggie Grill in 2011 to help guide the brand’s expansion. Today, he sees significant growth potential for the chain.

Meat-free concepts traditionally have been dogged by the core weakness that the vegetarian and vegan populations are statistically small in the United States — only about 5 percent of people identify themselves as part of those groups, according to a July 2012 Gallup poll.

However, there’s a growing number of people, sometimes called flexitarians, who eat meat but occasionally choose plant-based meals for health or environmental reasons. In a Harris Interactive poll commissioned by the Vegetarian Research Group, 43 percent of non-vegetarian respondents said they eat one or more meatless meals each week.

Veggie Grill plans to cater to all of them, regardless of what drove them to consider a meat-free meal.

“Our customers come from a very broad range of people,” Dollarhyde said. “The common thread … is they’re eating more mindfully, [whether they’re] coming at it from a sustainability/carbon-footprint approach, from an animal-rights approach or doctor’s orders.”

But all that means nothing if the food isn’t appealing, he said. Under the watch of chef and “chief foodie” Ray White, Veggie Grill’s menu is designed to offer dishes that are hearty and flavorful without the use of meat, dairy, cholesterol, trans fat, refined sugar or high-fructose corn syrup. The dishes replicate the flavors of some familiar classics — Buffalo wings, nachos, crab cakes — but are created with dairy-free cheese and sauces and a choice of meat-free proteins, such as tempeh or the chain’s proprietary Chickin’ or veggie-based options.

The plant-based menu is in line with modern dining trends, according to Chicago-based research firm Technomic Inc. In a recent 2013 outlook, the company predicted that customers’ “flirtation with vegetarian fare” and “flexitarian fascination” would drive interest in vegetables, even more divisive ones like kale and Brussels sprouts.

The concept is resonating with customers, as well, and has built a loyal following, Dollarhyde said. Same-store-sales trends have been positive for three years and are up 15 percent this year.

The chain is concentrated on the West Coast, with locations in California, Oregon and Washington. For now, the West Coast remains the target market for expansion, but Dollarhyde said the brand can find a home in any region where consumers have a little higher disposable income and a little more education.

“We intend to change the way people eat, think and talk about vegetarian food,” Dollarhyde said. “In Southern California, at least, we’re well on our way.”