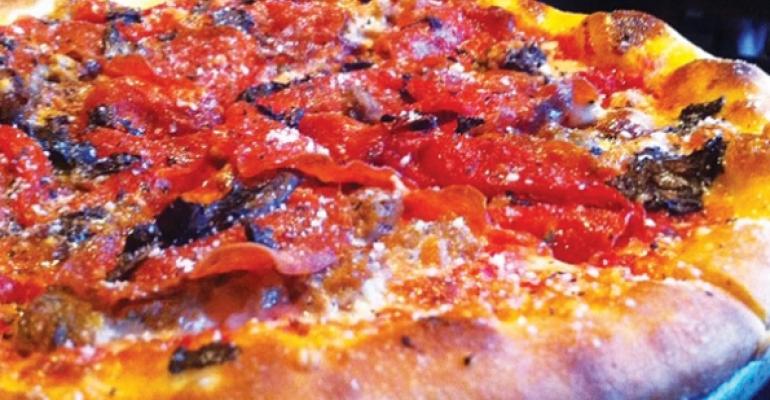 The founders of Spin! Neapolitan Pizza credit a little serendipity for the birth of their brand.

Gail and Richard Lozoff and Edwin Brownell were ready for their next restaurant venture. The trio had previously collaborated on Bagel & Bagel, a fast-casual concept that eventually became Einstein Bros. Bagels. But gourmet pizza was the topic of conversation when they all got together one night years ago.

“As sometimes happens, the first thing you really need in a restaurant is a great location,” Gail Lozoff said. “A great location popped up three days later.”

Spin opened its doors in Overland Park, Kan., about a year later in 2005.

Since then, the Lozoffs and Brownell have opened four more locations in the greater Kansas City, Mo., area, with a sixth set to debut there later this year. They also inked their first franchise deal last year with Craig Hofman, owner of the 15-unit Lucille’s Smokehouse BBQ brand, who has agreed to open 37 Spin units in Southern California.

When developing Spin, Lozoff said they strived to combine the best parts of fast casual and casual dining. They collaborated with Michael Smith, a James Beard Award-winning chef, to create the menu, which includes pizzas, salads, soups, flatbreads, paninis and gelato. They use stone ovens to bake the pizza and roast toppings, such as pecans, tomatoes, onions and artichokes. All locations serve wine, beer and sangria. Check averages range from $10 at lunch to $16 at dinner.

“It’s really culinary designed but not with that price point,” Gail Lozoff said. “We also have a big emphasis on salads. I think people come to us for our salad-pizza combination more than just pizza.”

The owners said they focused on quality over cost as they sourced their ingredients. They also aimed to keep drink prices low, with no glass of wine over $6.95 and all bottles priced at $18. They declined to disclose sales figures but said high volume and “stringent operational systems” make up for higher food costs.

The service style also is a blend of fast casual and casual dining, Brownell said. Customers order and pay at a counter and then sit in the dining room. A server brings their drinks and food and takes any additional orders.

“Our pizzas bake in about five to seven minutes,” Brownell said. “By the time they sit down, it’s about five minutes [until they get their food].”

“In fast casual, if you could provide an element of service that goes beyond someone just picking up your plate, it’s really very nice,” he said. “Lunch time is not as important as dinner. But at dinner, if you want to sell a glass of wine, [customers] don’t want to get up to get it.”

The service style and choices beyond pizza, such as soups and salads, also help Spin compete with fast-casual powerhouses like Chipotle Mexican Grill and Panera Bread, Small said.

“The entry point for their products is not that much more than what you would pay at Chipotle, but it’s a different experience,” he said.

Hofman, Spin’s first franchisee, is expected to open his first store in the first half of this year. The owners said they designed Spin with growth in mind and expect to continue expansion through franchising by finding partners like Hofman who share the brand’s culture and values, including a commitment to local communities.

“Philosophically, we believe that building strong local restaurants is really important when building a strong national brand,” Gail Lozoff said. “It’s really building from the inside out.”