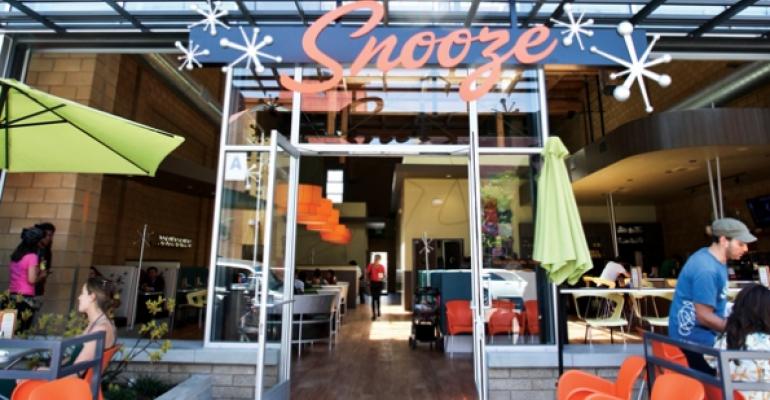 Snooze, a six-unit casual breakfast-only concept, is looking to make its mark in a daypart long dominated by quick service and family dining. Since its 2006 founding in Denver, Snooze has drawn long lines of people hungry for such dishes as Pineapple Upside Down Pancakes and five kinds of eggs Benedict, which are served in a retro setting described on the brand’s website as “part Jetsons, part Happy Days, part Flinstones.”

After expanding out of its home market of Denver in 2011 with new restaurants in Boulder, Colo., and San Diego, Snooze is gearing up for its next phase of growth. Last year the brand gained a private equity partner in San Francisco-based Weston Presidio and brought on industry veteran David Birzon as chief executive. Snooze now expects to open two to three restaurants this year and is exploring new markets, including Scottsdale, Ariz., and Austin, Texas.

“For the past years, it’s like we’ve been slowly putting together a rocket ship. Now we have the right pilot and the right fuel,” Schlegel said.

It has been quite a journey for Schlegel, who said he leveraged everything he had and took out three different loans to open the first Snooze. He literally lived there, sleeping in an apartment above the restaurant that now serves as the brand’s headquarters. It was a bit of a gamble, said Schlegel, who remembers thinking, “either I’m moving in with my mother, or this is going to work.”

Snooze has paced its growth so far. Schlegel and his team, which includes his brother, Adam, spent nearly three years fine-tuning Snooze and developing its company culture before opening a second location in Denver in 2009. Two more restaurants opened in Denver in 2010, followed the next year by locations in Boulder and San Diego.

Snooze is open from 6:30 a.m. to 2:30 p.m., offering a menu that includes traditional morning fare as well as unusual takes on breakfast favorites, such as “Coffee and Donuts” Pancakes, which are topped with maple icing and crushed pecans and served with espresso-cream syrup. The restaurants also offer sandwiches, salads and burgers. All six restaurants feature a full bar that serves up mimosas, Bloody Marys and other cocktails.

While weekend brunches are big business, Snooze also draws plenty of weekday customers, who hold business meetings or take advantage of the restaurants’ free Wi-Fi, Schlegel said. In addition, Snooze targets overnight workers, such as police officers, doctors and nurses, who often come in for a bite or a drink after their shifts.

“It’s difficult to keep the energy levels at 100 percent for breakfast, lunch and dinner,” Birzon said. “We really feel we can give 110 percent doing what we do best.”

Snooze’s challenge now as it expands is to find the right growth pace and stand out from the crowd of other regional brands with a similar focus, Allen said.

“Part of the opportunity is to leap out there and claim that No. 1 or 2 position and really go for it,” he said. “But there’s an inherent risk of growing too fast. You have to be careful not to be lured into growing too fast — or too slow, where they miss an opportunity.”

Birzon also noted the importance of growing at a pace that would allow Snooze to stay true to its community- and sustainability-minded culture and to continue drawing high-quality staffers.