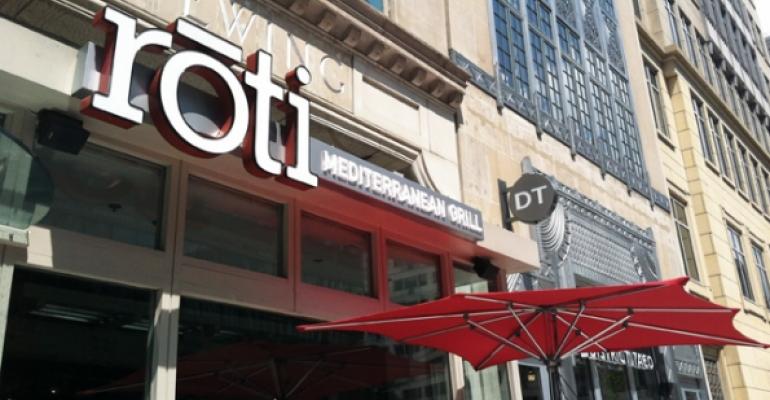 At first glance Roti Mediterranean Grill seems like a lot of other fast-casual brands: It offers better-quality food that’s customized to order in front of diners. What differentiates Roti — and is driving its exponential growth — is a combination of authenticity, variety and the right cuisine at the right time.

The choice to base Roti’s menu on Mediterranean cuisine has proven a good one. According to Chicago-based market research firm Technomic Inc., consumer interest in Mediterranean foods is growing and is expected to continue to grow, in part because of its perceived health halo.

“The appeal for Roti and Mediterranean food is fueled by health,” said Bill Post, Roti co-founder and chief executive.  “[The Mediterranean diet] is generally regarded as the healthiest diet on the planet. I think that resonates with people.”

Roti has grown quickly since the first location opened in 2007. By 2010 there were six units. In 2011 the chain doubled in size, expanding to 12 units. Currently, there are 13 locations, all company owned.

Three or four more are planned for the Chicago metro area and Washington, D.C. In late February the chain will open a unit in Bethesda, Md., as well as its first store in New York. Post said he anticipates there will be more than 20 total units by year’s end.

While the Mediterranean fare draws people to Roti, authenticity and variety are important, as well. The authenticity comes from the concept’s inspiration: a small restaurant in Miami that Post and his co-founders frequented for its shawarma roti.

“We loved the sandwiches — cutting meats on a vertical rotisserie,” Post said. “We saw a unique opportunity to do shawarma.”

At Roti diners build their meal of choice — a sandwich, salad or Mediterranean plate. They choose from ingredients such as house-baked pita or laffa bread; meats freshly sliced off vertical rotisseries; nearly a dozen toppings, including hummus, couscous, Spanish eggplant, red cabbage slaw and Kalamata olives; and sauces and dressings such as yogurt and cucumber, red pepper aïoli, and tahini.

“People thirst for different flavors,” Post said. “There are so many burger and chicken places out there.”

Post said he knew the concept would be a hit from the opening of the first Roti in Chicago.

“The lines were out the door on a very, very cold weekend in February,” he said. “It was evident to us from the very beginning that there was something that resonated with people.”

Dean Small of Synergy Restaurant Consultants in Laguna Niguel, Calif., said he understands why diners are attracted to Roti.

“There’s an element of freshness that people see [in the] handcrafted [offerings], the meat cooked upright, signature bread,” said Small. “Part of the experience is the cooking platforms, part is the variety of toppings you can put in a sandwich, part is the decor.”

Small added that he sees tremendous potential in the concept, as well.

“Roti has strong potential for growth because it’s fast, convenient, perceived as being healthy and priced competitively for the fast-casual market,” he said. “Moreover, I think it has a strong appeal to women, so that opens the doors for growth in many geographic areas.”