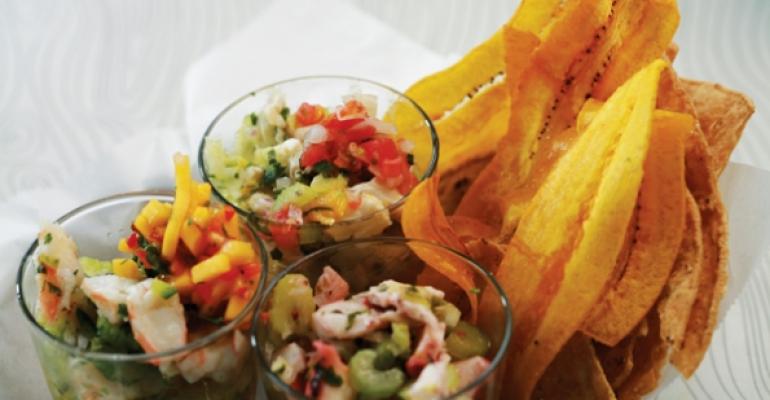 Two established restaurateurs, Chris Sedgwick and his former wife Michele, were seeking in 2005 a new way to express their love of food. What they came up with was a hip and authentic taqueria that they located in an abandoned Pure Fuel Oil gas station dating to the 1920s.

With a fun vibe and laid-back ambience, Pure Taqueria was “for ourselves,” Chris Sedgwick said.

“It’s a hangout that’s open, airy, with our kind of music [loud] and great, very powerful Margaritas,” he said. “We do everything from scratch every day, starting at 6 a.m.”

According to Chris Sedgwick, the economic downturn created “the right time” for the concept.

“Casual dining took it on the chin,” he said. “This let people concentrate on creating a vibe — doing great food rather than expanding fast.”

Today, the 8-year-old concept has five locations in Georgia and a sixth in suburban Charlotte, N.C.

The pricing and the food mesh with what today’s consumers are seeking, Chris Sedgwick said.

“[It’s] something special — incredible Mexican cuisine that can’t be simplified,” he said.

Systemwide sales are $12 million, and the average unit volume is $2.5 million.

“Pure positions itself as a taqueria, which connotes authenticity,” said foodservice consultant and Nation’s Restaurant News contributor Nancy Kruse of The Kruse Company in Atlanta. “The menu delivers, with items like ceviche, tamales, pan-seared Veracruz snapper and caldo de mariscos — a seafood stew.” Kruse noted that an interesting beverage program featuring Mexican soft drinks as well as beers and cocktails differentiates Pure from other Mexican concepts.

“These items aren’t typically found on casual-dining Mexican menus, and they give the concept a sense of authenticity and a real competitive edge,” she said.

That beverage program not only differentiates Pure Taqueria from its competition, but it brings in 40 percent to 50 percent of sales, which makes it a factor that drives growth, according to Dennis Lombardi, executive vice president of foodservice strategies at WD Partners in Columbus, Ohio.

“The challenge for these emerging brands is maintaining unit economics, especially when they move outside their heritage market,” he said. He added that the trick with bar business is “keeping it hot and hopping — making it the place to go and to be seen.”

Joe McFadden, Pure’s director of operations, attributed the brand’s success so far to “making it great ... in a way that’s affordable.”

The average check is between $18 and $20 for food that Chris Sedgwick described as “sometimes traditional Mexican but sometimes out of the box, with Escoffier-based techniques.” He noted that executives work hard to close the gap between the front of the house and guests, explaining to managers that “every guest chose us from hundreds [of restaurants] in our area, and we want to make that work for us. It’s an endless pursuit.”

Pure Taqueria will grow through franchising, and current target markets are in Georgia, Florida, Tennessee and North Carolina. The franchise fee is $40,000.

“Making sure we have good execution with the right partners” is the key to growth for Pure Taqueria, Chris Sedgwick said, noting the concept would grow at a rate of one to two units a year. “It’s slow and steady as she goes,” he said.