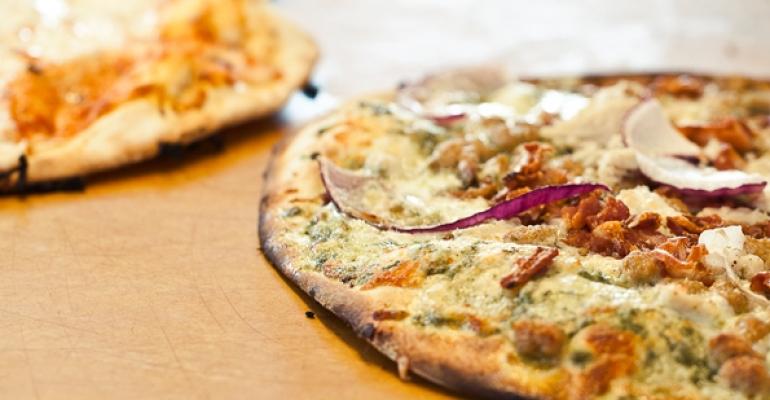 He was busy running Freestone Capital Management until October 2012, when he sold a controlling interest in the wealth management firm to its executive team. He immediately was named chief executive of MOD, and now he’s focused on growing the chain.

“It suffered from benign neglect,” he said. “I was preoccupied with other things.”

In truth, the Seattle-based chain of eight stores probably didn’t suffer much. Average unit volumes are about $1 million, and the Svensons have more MODs on the drawing board for this year. The first store outside of the Seattle area will open soon in Portland, Ore., which is about a three-hour drive from Seattle.

“There is some civic pride, or rivalry, between the two cities,” Scott Svenson said. “They are both bohemian, progressive, educated communities, and for us it’s a logical first step outside our core market.”

MOD is an acronym for “made on demand.” And the concept is one of many jockeying for position in the increasingly crowded customized-pizza segment. Customers choose from 28 toppings and wait about three to four minutes for their 11-inch pies to be prepared and baked in an 800-degree oven.

The service model mimics that of Chipotle Mexican Grill, which, along with Starbucks, inspired MOD, the third restaurant chain the Svensons have had a hand in launching. Starbucks purchased the first chain, the then-75-unit U.K.-based Seattle Coffee Company, for nearly $85 million in 1998. In 1999 the Svensons helped launch Carluccio’s, a U.K.-based Italian deli-cafe concept that later went public.

“Starbucks is one of the real pioneers and deserves credit for changing consumer expectations,” Scott Svenson said. “Starbucks took a standard product, coffee, and made it customizable and said, ‘We will deliver the product exactly the way you want it.’”

Because today’s consumers expect to customize everything, MOD is equipped to accommodate them. All of the pies are priced at $6.88, and Scott Svenson said he does not worry that people will order all 28 toppings.

“We do try to educate the consumer,” he said. “If you want a lot of toppings, it’s best if they take up one layer, so we suggest less of each topping so the dough will cook evenly.”

The pay-one-price menu likely appeals to consumers looking for value, an important product attribute these days.

Molly Harnischfeger, a director in the restaurant and foodservice practice at AlixPartners in New York, said pricing is a very big issue now.

“What we are seeing in the industry is tremendous price pressure,” she said. “There are some concepts [where] price doesn’t matter, and they are able to pass it along. However, a lot of concepts struggle with price points.”

She added that the successful chains will be the ones that juggle rising commodities costs in addition to labor costs and health care-related costs.

Scott Svenson said it helps that MOD offers only one crust, not five or six the way some pizza chains do — although a gluten-free crust is in development. The restaurants also use a gas-fired display oven, not a conveyor-belt oven. A conveyor belt would be foolproof, he said, but it churns out a less interesting product.

“You have to have a cook who monitors the pizzas and rotates them,” Scott Svenson said, explaining the gas-fired oven. “You get a handmade, hand-fired pizza.”

Ally Svenson coined the brand’s tagline, “Simple foods for complex times.” That phrase reflects the philosophy that it’s more important to do one thing, pizza, really well than to offer many different menu items, he said.

“We want to be more like In-N-Out Burger,” he said, referring to the Irvine, Calif.-based chain with the cult following that serves only burgers, fries and drinks. “Some of those who imitated us have vast selections.”