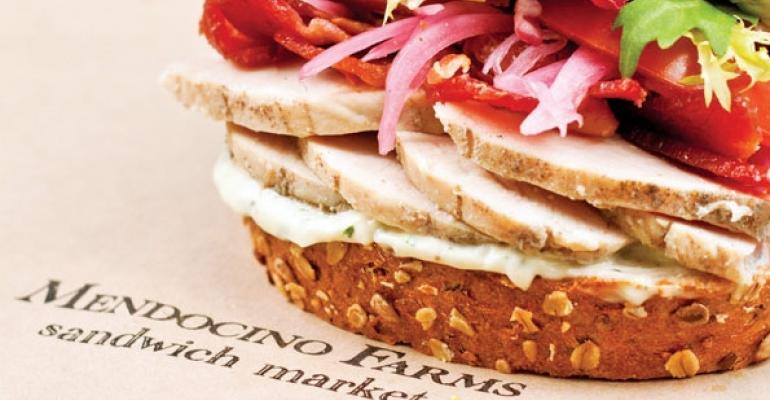 Mario Del Pero, founder and chief executive of Mendocino Farms in Los Angeles, said he sees 2013 as a year of “spreading the Mendo joy.”
With the seventh location set to open in Los Angeles, the fast-casual sandwich chain has built a devoted fan base from downtown to the city’s oceanside Marina del Rey neighborhood, with guests lining up out the door for artisan sandwiches prepared using fine-dining techniques.

Armed with private equity backing, the chain will take its first step outside the heart of Los Angeles this year, first into suburbs like Sherman Oaks and Pasadena, and then into neighboring Orange County. By 2015 Mendocino Farms will ramp up growth to five units annually, Del Pero said.

Key to that strategy, however, is the chain’s ongoing evolution from use of a commissary system to one that relies more on third-party purveyors producing some of the concept’s proprietary menu ingredients.

Mendocino Farms is known for sandwiches prepared with high-quality ingredients, mostly made in house and created by former fine-dining chef Judy Han. The commissary system has worked well in Los Angeles, but Del Pero said it will hinder growth outside the region.

“We’re treating it like a military operation. We want to make sure our supply chain is in place before we move out,” Del Pero said. “Evolving out of the central kitchen will be huge for us.”

While the chain will continue to make some proprietary products it doesn’t feel a third party can replicate, the shift away from the central kitchen has relieved a lot of pressure, Del Pero said. It allows Han to work on new “break the mold” menu items designed for a growing multiunit organization with an antichain mentality.

One of the most popular sandwiches at one location, for example, is made with duck confit. But making duck confit for seven or more restaurants is “a near impossible task” for a chain trying to keep its pricing just a few bucks away from Panera Bread, Del Pero said.

Instead, Han has created a turkey confit version, spiked with a house-made “yellow rooster” sauce — like Sriracha, but made with electric yellow Peruvian chiles. The sandwich is scheduled to be introduced this spring.

Restaurant consultant Jerry Prendergast of Prendergast & Associates in Los Angeles said there is a risk with such a supply shift. Loss of control potentially could sacrifice quality.

“Their product is great,” he said. “That’s always a problem for people trying to put out a fine, unique product: controlling your supply.”

Meanwhile, Del Pero has been building the chain’s infrastructure to grow.

The company recently hired Greg Hernandez, a former executive at Rubio’s Restaurants, Hamburger Hamlet and Daphne’s Greek Cafe, as vice president of operations. The chain currently is recruiting a vice president of development.

With each new unit, Del Pero is focusing on unique architecture and design that will give each location its own character but still maintain recognizable common threads. The chain also is investing heavily in training to improve service and operations.

“My feeling is, if we’re going to get bigger, let’s also get better,” Del Pero said.

Jon Owsley, a partner at Catterton, said the brand is a hit because of its unique offering, great unit economics and fantastic leadership.

“The focus, first and foremost, on culinary excellence and innovation, combined with a fantastic service culture and great aesthetic, have created tremendous consumer demand,” he said. “Mendocino Farms is an incredibly well-positioned concept in a great category.”