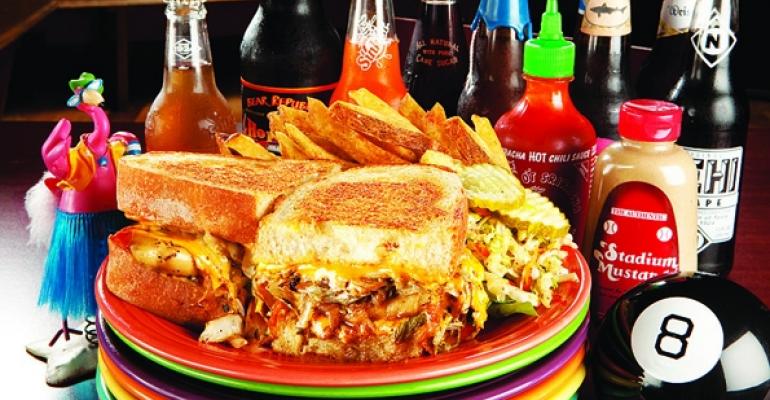 Melt Bar & Grilled is among Cleveland’s hottest restaurant brands right now, but owner Matt Fish only had ambitions of it being a simple neighborhood bar in 2006 when he opened the first of what would become four locations.

From the start, customers packed Melt not just for the selection of more than 100 craft beers and microbrews, but also for the menu’s star attraction: gourmet grilled cheese. Fish built Melt around the updated childhood favorite because he did not want to serve typical pizza and wings or the pretentious pork-belly BLTs in fashion at gastropubs across the country.

“I wanted to do the complete opposite of what everyone else was doing,” Fish said. “Working in restaurants in Cleveland, I would get bored and start experimenting with the good bread and good cheese around me. I went from making one a day for myself to 14 or 15 a day for co-workers and friends, and I ended up thinking that maybe this thing had legs.”

Melt uses grilled cheese as a platform for items like the Rising Sun Melt, which pairs pan-fried shrimp with kimchi and Thai chile aïoli with Muenster, or local favorites like The Parmageddon, which features two potato-cheese pierogis, sauerkraut, sautéed onion and Cheddar. Melt now offers 30 signature gourmet grilled cheese sandwiches. The average check falls between $12 and $20.

“We’ve always given value for your dollar, which helped us ride out the recession,” Fish said. “Cleveland is a comfort-food town. People love big portions and flavors, and that’s kept us popular.”

It is so popular with some people that they have tattooed Melt’s logo on their bodies for a lifetime 25-percent-off discount. Word also has spread the past few years thanks to appearances on “dude food” TV shows like “Diners, Drive-Ins and Dives” and “Man v. Food.”

“Every summer, we get people coming through Cleveland, and they saw us on ‘Diners, Drive-Ins and Dives,’ so they look us up while they’re stopping on their way to New York,” Fish said. “We got a huge traffic pop after the episode aired, but it’s definitely sustained itself.”

Steve Gleydura, editor of Cleveland Magazine, said Melt belongs in a clique of restaurants leading Cleveland’s recent dining renaissance. Melt has found a way to be both exclusive — wait times are routinely at least an hour, regardless of time of day — yet down to earth, with inventive grilled cheese that feels very local, he said.

“If you look at Michael Symon, Jonathon Sawyer and guys like that, they really brought the chef’s touch to food that’s familiar to us, and Matt was definitely part of that,” Gleydura said. “The bar energy of the place really helps make you excited to go there, but it’s also a special place to eat.”

Fish said he wants to grow Melt organically, “but there’s no plan on paper.” He’ll look to open a Melt wherever the demand takes the concept, including later this fall in Columbus, Ohio, where a major developer recruited Melt to anchor a new plaza in The Short North neighborhood.

System expansion would resemble how the first location grew, Fish said. That restaurant’s small eating area routinely caused long waits, so Melt closed the adjacent alley to add a patio and bought the store next door to add another dining room. When that was still too cozy, Fish opened three more units around Cleveland.

“We can do this on multiple levels in multiple cities, and we’ll take it as far as we can take it,” Fish said. “Opportunities seem to find us now, which is great because we’ve got an independent spirit that people latch on to, and developers and landlords see that we’re popular and busy.”