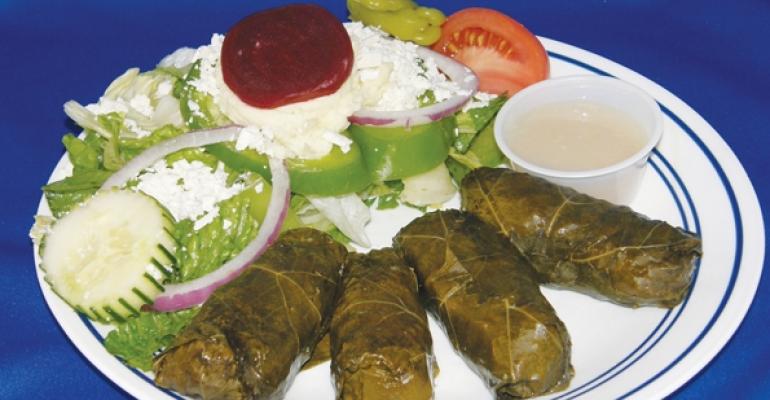 Nick Vojnovic is passionate about growing small restaurant brands into nationally known chains. And he believes his latest endeavor, Little Greek, just might be one of the fast-casual segment’s next emerging concepts.

The Brandon, Fla.-based chain serves up such Greek classics as gyro plates, fresh Greek salads and dolmades — stuffed grape leaves. In its quest for authenticity, Vojnovic said, Little Greek has landed itself in a budding sector that offers healthful, slightly upscale fast-casual food.

The mastermind behind Little Greek’s food is founding partner Sigrid Bratic. Estonia-born Bratic purchased a struggling Florida restaurant, the Happy Greek, in June 2004. She changed the name to Little Greek, developed a menu focused on well-prepared Greek food and transformed the uninspired operation into a popular destination, Vojnovic said.

“Per square foot, it does more than The Cheesecake Factory,” Vojnovic said.

Before becoming president of Little Greek Restaurants Inc. in 2011, Vojnovic already had made his mark on the foodservice industry. He served as president of Beef ‘O’ Brady’s for 12 years, growing the small company of 30 Tampa, Fla.-area stores to a chain with 270 locations in 23 states.

Vojnovic left Beef ‘O’ Brady’s in 2010 after the company was purchased by private equity firm Levine Leichtman Capital Partners. After departing, he decided to go back to school, earning an MBA at the University of South Florida.

“While I was at that program, I looked at 80 different franchise concepts,” he said. “One of my friends kept telling me to check out Little Greek.”

When he did visit the location, Vojnovic said he was struck by what he saw. Little Greek was outselling Five Guys Burgers and Fries in Clearwater, Fla., he said. There was a big line, and the store was full.

“I thought, ‘Man, there’s something going on here,’” he said.

He also decided it had no national competition.

“You’re not going up against Five Guys or Panera, really,” he said. “The food was awesome. Everything’s made from scratch.”

So Vojnovic acquired a stake in the company and partnered with Bratic. She would develop the restaurants and the food, while he would grow the brand.

Menu trends analyst Nancy Kruse, president of The Kruse Company in Atlanta and a Nation’s Restaurant News contributor, said Greek and Mediterranean chains are poised for growth in the Southeast and across the United States.

“The foods and flavors are highly approachable, and they enjoy the halo of health that’s associated with cuisine from the region,” Kruse said. “Also, food from the eastern Mediterranean is still relatively undiscovered versus foods from Spain or Italy. There’s lots of upward growth potential.”

Little Greek currently has 11 locations and is set to add six or seven more restaurants to its system in 2013. The plan is to have 25 locations in three years, and in 10 years Vojnovic said he would like to see 150 Little Greek locations across the United States.

The growth plan is pretty straightforward, Vojnovic said. He is working with his current network of franchisees to gauge interest, and he plans to go where the talent is — though  gradually and strategically.

“One of the mistakes at Beef ‘O’ Brady’s was that we grew too fast,” he said. “You look back at the mistakes you made and fix them.”

Little Greek targets a mostly female, slightly upscale clientele, similar to Panera Bread. As such, a location that already has a Panera or Chipotle Mexican Grill tends to be a good site for a Little Greek, Vojnovic said.

The plan is to expand but not downgrade the Little Greek brand, he added.