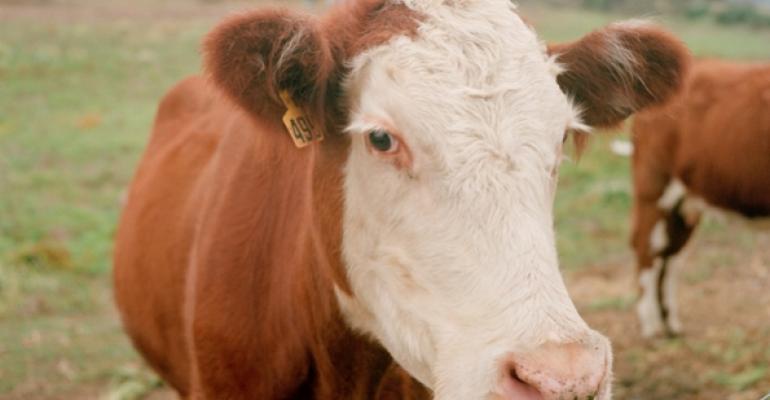 Consumers want to eat more sustainably produced beef, and restaurants want to sell it to customers, but they have trouble sourcing it. So why aren’t more farmers producing it?

That chicken-and-egg question has a complex answer with various perspectives, according to a panel on beef eco-protein trends at the NRA Show on Monday.

Debating the issue was Townsend Bailey, director, supply chain sustainability for McDonald’s USA LLC, which is working toward offering more sustainably raised beef; Michael Berger, founding partner and vice president of supply chain for the 60-unit Elevation Burger chain, which serves only organic, grass-fed beef; and Randy Krotz, CEO of the U.S. Farmers and Ranchers Alliance, which represents about 90 farmer and rancher-led organizations who would like to be part of the conversation about sustainable agriculture.

Bailey said he likes to think of sustainability as McDonald’s best-kept secret.

The Oak Brook, Ill.-based quick-service chain has been grappling with sustainability issues for years. McDonald’s first public statement about beef sustainability, for example, was in 1989, when it pledged not to source beef from the Amazon biome.

More recently, in 2014, McDonald’s helped create the framework for what has become the U.S. Roundtable for Sustainable Beef, a multi-stakeholder organization that has defined and set goals for more sustainably raised product. The group follows the definition of sustainability set by the Global Roundtable for Sustainable Beef, which prioritizes elements of environment, people, animal welfare and efficiency.

Bailey said the process of moving toward the purchase of meat that meets those standards has been “slow and often frustrating.”

While McDonald’s is not likely to move to organic beef, there are elements of organic farming that can be brought to scale, he said.

The issue, however, is complex, and the chain is keenly aware of how seriously its position could impact both farming and the food industry as a whole, Bailey said.

“We’re not just putting demands on farmers and telling them what to do,” he said. “We’re trying to engage as co-collaborators.”

Berger of Elevation Franchise Ventures LLC, meanwhile, has benefited from its organic positioning in the hotly competitive world of better-burger players.

The chain estimates that 35 percent of its customers are directly responding to the brand’s organic message and consumers increasingly want to know where their food is being sourced, how it’s raised and what’s in it.

Sourcing organic meat in the U.S., however, remains a challenge, but it would be easier if a large buyer like McDonald’s made a commitment to that type of product, he said.

The availability of organic beef is hampered by a complex mix of government policy, an established and well-run agriculture system, the widespread use of genetically modified corn to feed cattle, and the habitual practice of using antibiotics, Berger said.

The cost of land in the U.S. also impacts factors like pasture-raising cows, and climate is an issue, he said, as are special interest groups influencing federal lawmakers.

“But you do see an industry changing in ways that will lead to more sustainable practices,” Berger said.

Randy Krotz of the U.S. Farmers and Ranchers Alliance, however, said his group works with member farms on issues like animal welfare, antibiotic and hormone use, crop inputs and GMOs.

But it also attempts to present accurate and meaningful information about farming to offset what he described as misinformation from activist groups.

The conversation about sustainability has to include farmers’ concerns about appropriate use of water, soil, air and habitat.

When asked why more farmers are not using more sustainable practices, Krotz said because cattle get sick and need antibiotics, and the grain supply is largely genetically modified, which he contends has resulted in less use of insecticides and herbicides.

In addition, it takes longer for an animal to get to finishing weight on grass, and there are water consumption issues for both maintaining grass pastures and raising corn.

Krotz and Bailey agreed, however, that restaurant operators concerned about the issue should take it to their supply chain.

“Go to the farm,” Bailey said. “Smell it. Experience it. Go to the processing plant. It will give you a new perspective.”