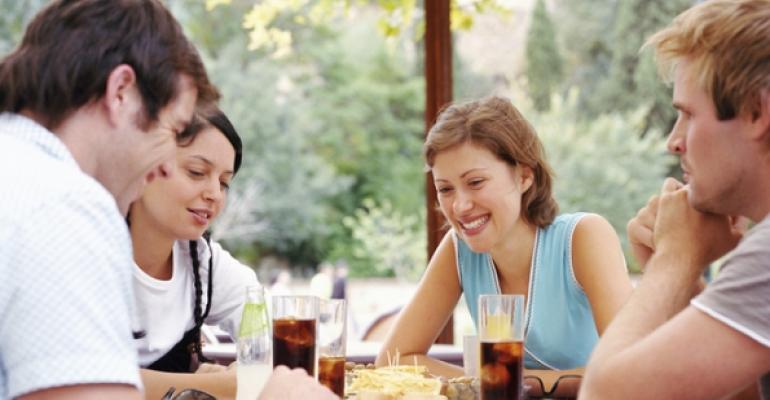 Sales of carbonated soft drinks have been on the decline for years, but they appear to have rebounded a bit, according to a Coca-Cola executive.

Kathleen Ciaramello, president for national foodservice & on-premise for The Coca-Cola Company, said domestic sales for carbonates soft drinks were up by 1 percent in 2015.

That growth is largely driven by Millennials, who buy more drinks than their elders, according to research Coke shared during the National Restaurant Show.

Many of the carbonated drinks and related items on display at the show emphasized Millennial values, including natural products and clean labels, as well as more experimental flavors.

Coke was proffering Blue Sky, a 45-year-old brand from New Mexico that it bought last June. It’s sweetened with cane sugar and containing no artificial color, and Brad Spickert, Coke’s vice president for national foodservice and on-premise marketing, said it was popular in sales channels focused on “natural” foods. The Blue Sky brand was only sold at retail in 12-ounce cans however. Coke has reformulated it and made it available as a fountain drink.

​Ciaramello said brands with legacy and history like Blue Sky have high appeal to young consumers.

“Consumers are looking to be a little bit healthier, but they also love bubbles,” said Bob Heinz, Reed’s director of national sales.
BaiBubbles was banking on that with a line of fruit-flavored sparkling beverages containing coffee fruit — the fruit that contains coffee beans, which are technically seeds — and just one gram of sugar.

A potentially new category of carbonated drinks was on display by Teafinity and B.W. Cooper, both of whom were marketing sparkling iced tea.

Correction: May 21, 2016 An earlier version of this story misspelled Brad Spickert's name.