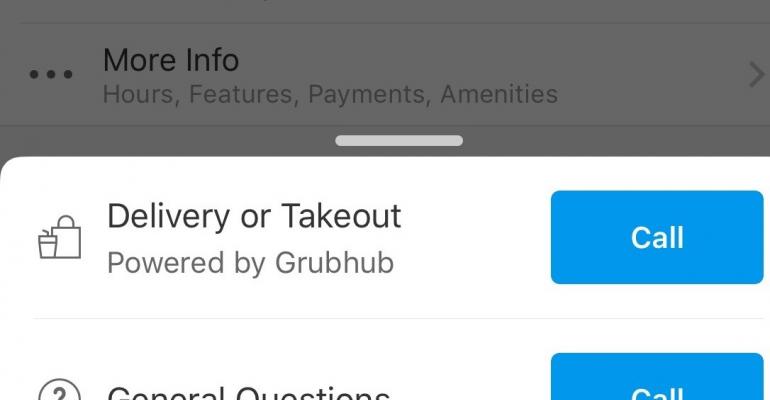 Yelp: ‘We always ask our partners to be transparent’

To be more transparent, Yelp has updated its app to show consumers when delivery and takeout phone numbers are powered by Grubhub.

The change, which went into effect late Monday, comes two weeks after Vice.com called out Yelp for “pushing” customers to call numbers owned by Grubhub in an alleged scheme aimed at generating more commission fees for the Chicago-based third-party operator.

Yelp said these referral numbers began showing up on the app in October 2018 through a partnership with Grubhub. For restaurants that have a marketing agreement with Grubhub, the “Delivery or Takeout” call button within the Yelp app now, as of Monday, clearly indicates that this option is “powered by Grubhub," Yelp told Nation's Restaurant News.

The update will make it “more clear to Yelp users when they’re engaging in a Grubhub powered food order within the app," Yelp said, adding that less than 2.5% of restaurants in the U.S. have a Grubhub referral number on its app.

Grubhub previously stated that referral numbers are only created for restaurants that agree to it. The delivery operator made that same argument when it was accused this summer of creating fake restaurant websites.  Still, some restaurant owners have said they were surprised by the additional fees generated from referral websites and phone numbers.

Yelp said it is asking all of its partners to be more transparent.

“While it is our understanding that the restaurants with Grubhub referral numbers have a marketing and customer acquisition agreement with Grubhub, which allows the company to utilize referral numbers on third party partner sites like Yelp, we’ve come to realize that not all restaurant owners understood these terms applied to Grubhub's integration with the Yelp app,” Yelp said in a statement sent to NRN. “We always ask our partners to be transparent and communicative with their customers and consumers alike and have continued to urge them to do so in this case.”

Over the years, Yelp has transitioned from being a consumer review site to a company that connects consumers to businesses. For restaurants, the app has expanded its features to include allowing customers to order takeout, delivery, make a reservation or put their name on a waitlist.

Yelp said being a “trusted resource to consumers, as well as a valued partner to businesses, is our top priority.”

“Over the past 15 years, Yelp has helped millions of consumers discover great local businesses and transact with them,” the company said. “This is why many businesses market themselves on Yelp directly, and the reason that partners like Grubhub extend their own marketing and distribution partnerships with businesses to Yelp."