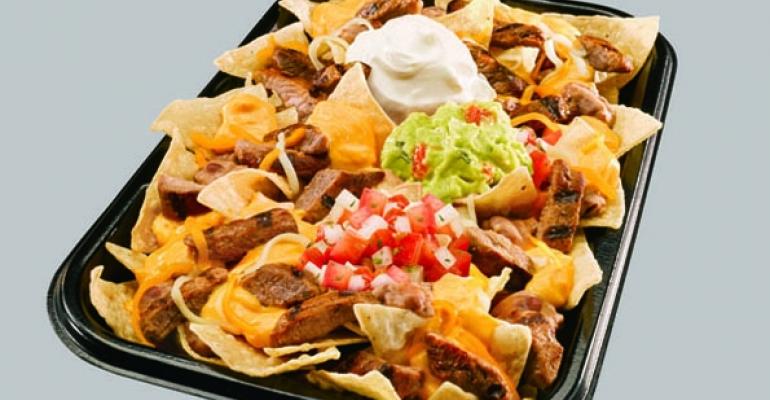 Taco Bell will launch Thursday an expanded dessert menu with new sweet treats and a beefed-up version of steak nachos in an effort to expand its daypart reach.

Taco Bell’s new desserts include a churro for a recommended 99 cents and a new cookie sandwich, featuring two triangular chocolate chip cookies with a vanilla-cream filling for a suggested $1.29. The items join existing desserts, such as Taco Bell’s signature caramel apple empanada and crispy bite-sized Cinnamon Twists, on the value menu.

In addition, as a limited-time offer, the chain is rolling out a strawberry and mango crème Fruitista Freeze this week as a sweet beverage option.

The chain's new XXL Steak Nachos features a triple portion of celebrity chef Lorena Garcia’s upgraded version of braised steak with melted cheese, guacamole and pico de gallo on a pile of tortilla chips for a recommended $5.99, or $4.99 for a regular ground beef or chicken variation.

Taco Bell officials also said the chain will begin tests of two more new products in test markets this month. A Double Steak Quesadilla, developed by Garcia for the Cantina Bell menu, will begin testing this week in Charlotte, N.C.

The item includes a double portion of braised steak — again, Garcia’s Cantina Bell version — along with pepper Jack cheese, which is a new ingredient for Taco Bell, in a grilled tortilla for $4.99. The quesadilla is served with a side of chips and salsa that Garcia has also improved, and reduced-fat sour cream.

In addition, a Smothered Burrito is being tested In Dayton, Ohio. The burrito can be filled with beef ($2.99), chicken or steak ($3.99), plus cilantro rice, and is smothered in a red sauce with melted cheese, similar to an enchilada.

Later this year, Taco Bell will add more savory snack options, including a line of “Loaded Grillers,” for 99 cents. The line is inspired by popular appetizer flavors, such as loaded potatoes, buffalo chicken and beefy nachos — each grilled in a tortilla, said Taco Bell spokesman Rob Poetsch. Early next year, the snack line will be promoted in a “Happier Hour” television advertising campaign, which will focus on building traffic between 2 p.m. to 5 p.m.

Taco Bell is not alone in seeking to tap into a growing demand for snacks. Sister brand KFC earlier this year launched slider-like Chicken Littles sandwiches, and Burger King has beefed up incremental sales with ice cream sundaes and mini Cinnabon products.

Irvine, Calif.-based Taco Bell, a brand owned by Yum! Brands Inc., has had great success this year with menu innovations, including the Doritos Locos Tacos line and the Cantina Bell menu, both introduced earlier this year. For its third quarter, Taco Bell’s same-store sales grew 7 percent, despite headwinds that dampened results for the chain’s quick-service competitors.