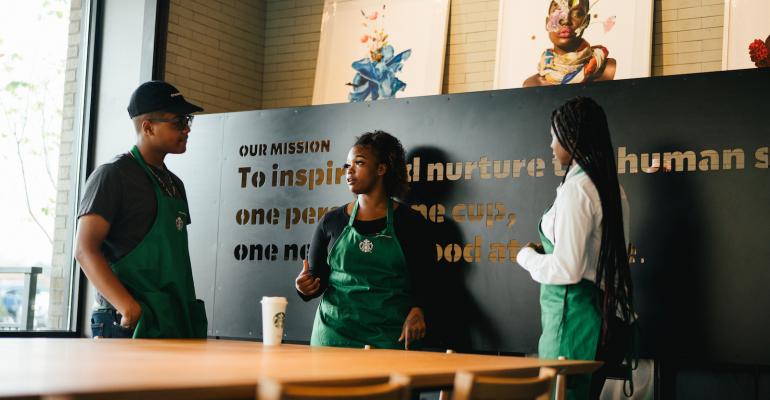 Starbucks employees at a community store in Jonesboro, Ga.
News

Starbucks announced that the company will be expanding its community stores initiative — which began in 2015 with 14 locations — to 100 stores by 2025. The community stores are meant to serve as an economic boost for low-income neighborhoods, or what Starbucks calls “opportunity zones,” by focusing on hiring locally and providing dedicated community spaces for job seekers and local events. After the initial program launch five years ago and first wave of stores, Starbucks will be opening the next generation of community stores starting in Prince George’s County, Md; Anacostia, D.C.; and Los Angeles, Calif. later this year.

The next generation of community stores will see a couple of changes: Starbucks will be partnering with local chapters of the nonprofit community organization United Way in order to facilitate community programs, and will also be repurposing or remodeling some locations into community stores to reach the company goal of 100 locations. Each store will also feature artwork from local artists to emphasize the vibe of that community.

“The nonprofits in Chicago will be addressing different issues than in the community store in Miami Gardens, Florida,” Bailey Adkins, community manager with Starbucks said. “We believe our partners know their communities best and they can make the most relevant and meaningful impact in that specific community.

In conjunction with the news, Starbucks also announced that they will be awarding 1,000 neighborhood grants to store managers in partnership with local nonprofits in order to better benefit the surrounding communities.

Each community store has a devoted room, table, or section for community events and programming, that stores can personalize with the needs of their community. Although Adkins said that many of their locations have used this space for workforce training, other stores have been more creative with their use of space. In the Trenton, New Jersey community store, store managers use the community space to organize open mic nights — especially prevalent in a city where nightlife is pretty quiet on the weekends.

But in expanding this program, Starbucks still has to tackle the big question of feasibility: If they are opening or remodeling stores in economically underprivileged areas, will the community members be able to afford frequenting a Starbucks, where a latte costs $3.65 in disposable income?

“These stores need to be able to operate and succeed in order to have the most impact,” Adkins said. “We don’t want to have to close a store that we opened in order to help out a community. But so far what we’ve seen with the 14 community stores already opened is that their success is consistent with the performance of our regular cafes. We’ve learned a lot from these stores about how to better engage with communities.”