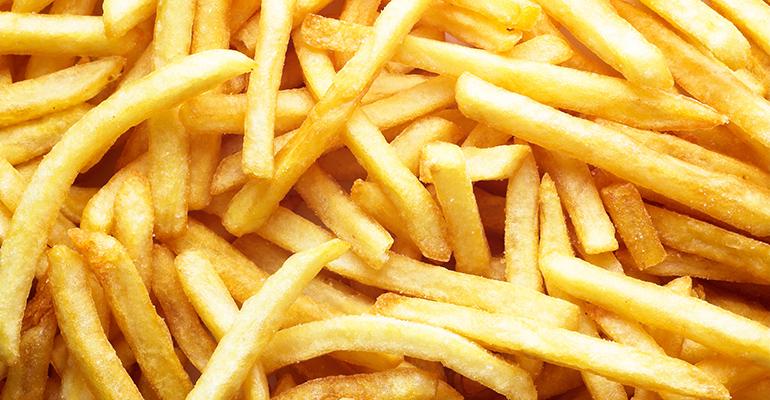 Cold, wet weather this fall has put pressure on U.S. and Canadian potato production and could impact french fry prices down the road, experts say.

Cool conditions hit growing regions in October. Farmers in Idaho and some parts of Canada were able to harvest their crops, but those in North Dakota, Minnesota and Manitoba, Canada, were forced to leave some crop in the ground because of snow and rain.

The U.S. Department of Agriculture in early November forecast domestic potato output will fall about 6.1% this year, which follows production declines in Europe last year.

Farmers in North Dakota, which is the No. 5 state in potato production, had to leave a sizable portion of this year’s crop in the ground.

“We are going to leave approximately 40% in the field,” said Mark Watne, president of the North Dakota Farmers Union, based in Jamestown, N.D.

“Our yields here were fine, it is just the lack of harvesting all of the potatoes,” he said in an email. “This shortage — if real — will probably not show up till May/June. Shortage maybe the wrong word. It will most likely be logistical inventory problem. Potatoes will be shipped longer distances.”

The possibility of a potato supply impacts as first reported by Bloomberg, which noted that “part of the problem for processors is the crop damage means potatoes are coming in smaller.” French-fry processors favor larger potatoes.

As the weather harmed crops, an increase in fry-processing capacity in Canada has boosted demand, Bloomberg noted.

The combination will lead to tight supplies, and it’s likely that potato prices could climb this year across North America, the news service said.

"The industry should have enough french fries to supply current restaurant usage requirements," Huffaker said in answer to emailed questions. "However, the industry had been hoping that this year's processing capacity increases would allow them to support more new-product introductions and expand exports. The crop losses described in the Bloomberg article will make it difficult to meet those goals."

Huffaker said he expect the industry to take steps to assure buyers that supplies will be covered, including the increase of early season processing contract volumes in the Columbia Basin, which covers parts of Idaho, Oregon and Washington, and the likely switch by processors to the open market, considering product that might have been used for chip potatoes. In addition, he said, "Buyers may be asked to relax quality standards for french fries during the current marketing season, in order to maximize the amount of product available to meet their needs."

"We expect all major french fry customers to be supplied with enough product to meet their ongoing needs," Huffaker said.

Update Dec. 3, 2019: This story has been updated with information from Bruce Huffaker, president of North American Potato Market News Inc.