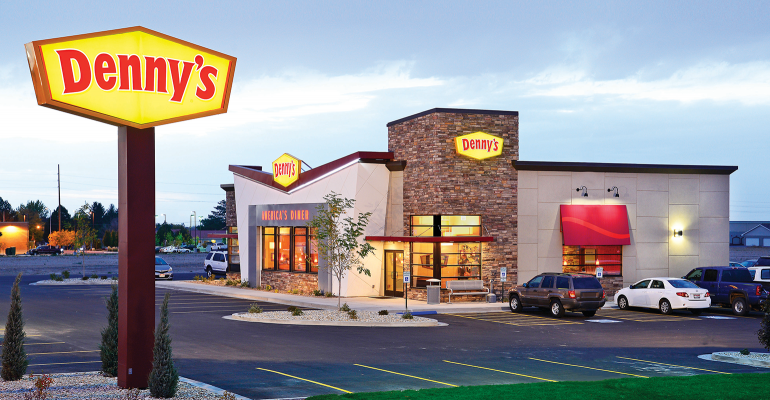 Delivery has been a promising addition to the Spartanburg, S.C.-based company for the past several years: off-premise sales now represent 11% of total restaurant sales, up from 7% when Denny’s first launched delivery in 2017.

“The number of restaurants actively engaged with at least one delivery partner grew from approximately 79% of the domestic system at the beginning of the quarter to approximately 88% of the system by the end of the quarter,” said John Miller, Denny’s CEO and president, during Tuesday’s earnings call.

As Denny’s continues to focus its attention on moving toward a more “asset-light” business model, its refranchising plan of converting between 90 and 125 company restaurants — which was first announced in October — is running ahead of schedule and will be completed by the end of the fiscal year. During the second quarter, the company sold 37 restaurants — about double what it anticipated — and in total, 97 stores have either been sold or will be sold by the end of 2019.

Going hand-in-hand with the refranchising strategy is the company’s heritage remodeling plan, and during the second quarter 40 restaurants were remodeled. The remodeled restaurants are designed to appeal to younger clientele with a “more modern, comfortable and inviting” aesthetic and new hardwood floor tiles, booths, tables and light fixtures, according to a 2018 interview with Denny’s Chief Brand Officer, John Dillon.

Denny’s attributes its relatively strong quarter to strong marketing efforts around menu promotions including new limited-time offers like hand-pressed burgers and crepes, including a commercial that went viral, featuring the Internet-famous dad and his baby “talking” to each other.

“We had a combination of the crepe promotion, which is a new introduction and platform for Denny's, along with the Super Slam starting at $5.99 and higher prices in sort of premium price markets,” Miller said during the earnings call. “But the combination of value with new news and interest in new product introductions was a good combination for us.”

The company reported flat traffic for the quarter but sales were boosted with added spending, analysts said.

“The argument that we’ve been making for some time now is that U.S. chain family-dining concepts enjoyed their best same-store sales quarter in Q2 2019 since Q3 2015,” analyst Mark Kalinowski said. “Consumers may not be going out to eat at restaurants more frequently in general, but when they do, they appear willing to spend more and this dynamic is showing up in key places, such as in family dining and at McDonald’s.”

The company opened six net units and closed nine, for a total of 1,702 total restaurants systemwide.