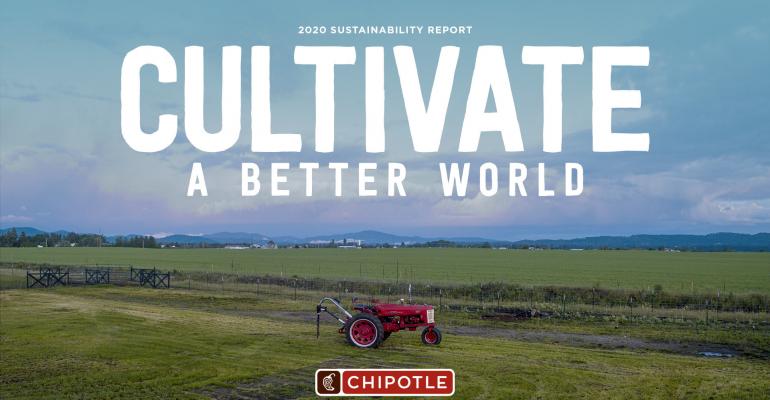 Chipotle also plans to release another plant-based protein by the end of 2021, according to the newly released sustainability report

Chipotle Mexican Grill has diverted 51% of its waste through recycling, composting and waste-to-energy programs, according to the fast-casual chain’s 2020 sustainability report released Thursday. This third annual report details Chipotle’s sustainability goals, impact and progress made in their environmental initiatives. For example, diverting more than half of their waste meets a goal originally outlined in the inaugural 2018 sustainability report.

“The events of this past year have shifted consumer behavior to lean towards a community focused society,” Chipotle CEO and Chairman Brian Niccol said in a letter published in the report. “This has further ignited a passion inside of many for making purchasing decisions that drive difference in the world around them. Greater awareness of where food comes from and how it’s grown can have an impact far larger than Chipotle.”

In addition to recycling and composting, the Newport Beach, Calif.-based chain has also found new uses for waste byproducts, like their program that turns used plastic gloves into garbage bags and their Avocado Dye apparel line dyed with avocado pits that would normally be discarded.

Some of Chipotle’s sustainability goals met over the past year include increasing the total pounds of produce purchased from local farmers from 31 million to 37 million and committing $5 million to support young farmers over the next five years.

Last month, the company also announced that they would be tying executive compensation to meeting larger corporate goals, including sustainability.

But Chipotle still have more work to do moving forward. Over the next year, they plan to pilot at least one new plant-based protein by the end of 2021, in addition to their sofritas, and achieve 100% third-party humane certification for their chicken.

“Keeping half of all the waste we produce out of the landfill is an extraordinary achievement, particularly for an organization of our scale,” Caitlin Leibert, Chipotle’s head of sustainability said in a statement. “We are dedicated to doing the work it takes to be a leader in this space and passionate about continuously innovating solutions to some of the biggest challenges of our time.”

In terms of environmental achievements, Chipotle has set up a composting program at one-quarter of their restaurants and expanded the globe-to-trash bag program to more restaurants. Moving forward, they hope to increase waste reduction by a further 5% by 2025 and pilot at least one new packaging design that reduces plastic in 2021.

Of course, recycling and composting programs have been challenged with over-capacity problems for years: an estimated 92% of plastic waste is never actually recycled and it’s all too easy for the wrong item thrown into a recycling bin to contaminate the entire bin. Composting facilities also rarely take packaging, which is a significant aspect of restaurant waste products. The result: a federal bill that was introduced last year to overhaul the recycling system and fix these issues.

Chipotle understands the challenges with the current recycling and composting infrastructure in the United States and has worked on staying ahead of the curve in the industry:

"With more than 2,700 restaurants, we are constantly monitoring shifts in waste management and regulation," Leibert told Nation's Restaurant News. "Part of how we mitigate issues is having a strong relationship with our waste management partners. Secondly, because of our scale and uniformity of operations, we are able to offer a steady, clean, and consistent stream of waste. This helps haulers tremendously, and can make us a more favorable partner. We have seen fewer issues with competition and more with haulers no longer accepting certain materials like glass as a result of global shifts in the recycling market."