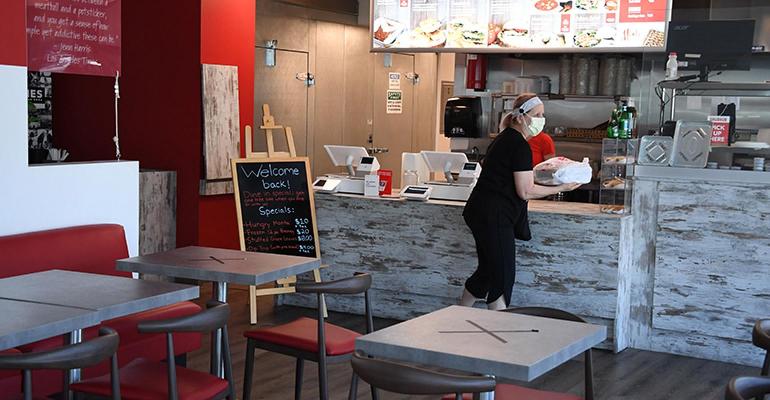 ROBYN BECK / Contributor / AFP
The California Restaurant Association is just one of many restaurant groups suing state, city, and county authorities after they enacted dining bans as COVID-19 worsens.
News

California joins cities and states battling dining restrictions in court. But are the lawsuits having an impact?

The California Restaurant Association is joining operators in Michigan, Philadelphia and Oregon in suing local authorities to reopen dining rooms

The California Restaurant Association, or CRA, this week joined a growing number of restaurant industry groups in cities and states across the country attempting legal action to overturn COVID-related dining restrictions.

After Los Angeles County officials on Sunday announced a ban on outdoor dining that would last at least three weeks — leaving restaurants with no option but takeout, drive-thru and delivery because indoor dining has been prohibited since March — the restaurant association sued and sought an injunction. On Tuesday, a Los Angeles Superior Court judge struck down the injunction, but said the association could move forward with the lawsuit against the county.

Similar lawsuits have been filed in cities like Philadelphia and St. Louis, as well as states such as Michigan and Oregon in recent weeks — each in different ways attempting to get COVID-19-era dining bans overturned.

Attorneys representing the CRA said Tuesday that “the county of Los Angeles’ own data shows that restaurants are not the leading cause of the recent increase in transmissions,” and that they will be back in court next week to argue that county officials need to provide scientific evidence to back their decision to prohibit outdoor dining.

According to the Los Angeles County contact tracing data, out of 219 businesses confirmed to be connected with three or more cases of COVID-19, only 6% has been linked back to restaurants, bars, and cafes.

“We’re saying that they have to produce evidence to justify such a drastic measure that is going to bankrupt many small business owners and cast many people out of a job before the holiday season begins,”  said Jot Condie, the CRA's president and CEO. “We don’t believe the county has proven this measure will be effective in addressing the current spike in Los Angeles and we’re asking the court to put the brakes on this outdoor dining ban until they can justify this extreme approach.”

But as the CRA moves forward with their litigation, similar cases around the country are already being denied in court.

On Tuesday in Oregon, for example, a federal judge struck down a request filed on Nov. 20 by a group of restaurants that claimed their industry is being unfairly targeted in comparison to other industries with the passage of the COVID-19 outdoor and indoor dining “freeze” that went into effect on Nov. 18 and is expected to last through Dec. 2. That move was a response a rise in COVID positivity rates, which climbed to 6.4% in Oregon.

“The court recognizes the heavy burdens that restaurant owners are facing […] but those burdens are outweighed by the benefits to all Oregonians,” U.S. District Judge Karin Immergut said in her ruling on Tuesday.

In St. Louis County, a lawsuit filed by 40 restaurants with the Missouri Restaurant Association charges the state with using “unfettered power upon them to regulate private conduct in whatever manner they deem necessary without any procedural, substantive or temporal constraints on their authority” in limiting dining to drive-thru, takeout and delivery-only starting Nov. 17. A request for a temporary restraining order was struck down by a county judge on Friday. The judge upheld the county’s emergency restrictions, but allowed restaurant operator lawsuit to move forward.

Similarly, in Michigan, a U.S. District Court judge denied the request from the Michigan Restaurant and Lodging Association for a temporary restraining order on the COVID-19 restrictions on restaurants there after Gov. Gretchen Whitmer passed a three-week-minimum ban on indoor dining starting Nov. 18.

The MRLA argued that other similarly service-oriented businesses like gyms and liquor stores still remained open, while restaurants are forced to rely on takeout and delivery-only again. Judge Paul Mahoney ruled, according to Fox 2 News Detroit, that the plaintiff did not give enough evidence in their case and that the “state is within its legal rights to issue the order.” A court hearing is scheduled for Nov. 30.

Other lawsuits against cities, states and local municipalities are still awaiting judgment. In Philadelphia, several restaurant owners, represented by Philadelphia Restaurant Owners Against Lockdown, LLC, filed a lawsuit against the city on Nov. 19 after Philadelphia’s Department of Public Health announced a ban on indoor dining, among other restrictions, as part of the city’s Safer at Home policies that went into effect on Nov. 20 and will remain into effect through the New Year.

“In an arbitrary and capricious manner, the defendant, Mayor Kenney and the City of Philadelphia, have deprived the plaintiff of the economic benefits and use of property while permitting similar businesses to operate and compete against these plaintiffs’ business,” the complaint, which is still under review, reads.

In response to the ongoing litigation, Philadelphia Mayor Jim Kenney argued the “prohibition on indoor dining” is “crucial” to the city’s response to combatting the spike in COVID-19 numbers.

In Illinois, the state Supreme Court has combined 10 individual lawsuits from restaurants and advocacy groups, bringing a total of 19 lawsuits against the state’s COVID-19 restrictions on indoor dining. All of the lawsuits question Illinois Gov. J.B. Pritzker's authority to “issue multiple, successive disaster proclamations under the Illinois Emergency Management Agency Act,” according to the Quad City Times. The cases are expected to go into oral arguments on Dec. 21 in Sangamon County Court before Judge Raylene Grischow.

But despite the influx of cases brought forward by restaurant operators against their local authorities (as well as multiple denials from judges) in recent weeks, the CRA's Condie said their case is different because they are going after the lack of scientific evidence connecting restaurants to COVID-19 superspreader events, rather than questioning the county’s authority to place restrictions on dining.

“Many of the lawsuits already out there are basing their argument on challenging the authority of state and local governments to do what they’re doing […] and judges seem to be reluctant to rule against the authority of public authorities trying to control the pandemic,” Condie said. “But we’re saying if they have come into new evidence that suggests dining outdoors is a danger then we need to know that so we as an industry can help with mitigating measures. Singling us out as an industry when they’re trying to contain the virus is not right.”