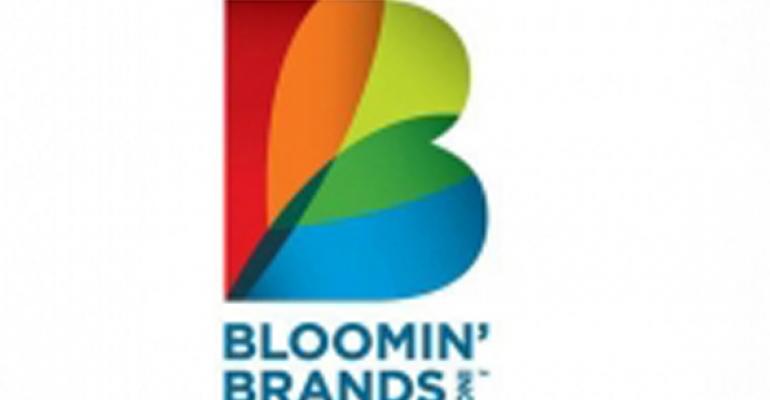 In a call to analysts Thursday, Bloomin’ Brands Inc. officials reported positive same-store sales increases across all brands in the third quarter, saying traffic-boosting efforts — such as the addition of lunch at Outback Steakhouse — are driving better-than-expected results.

As a result, the Tampa-based company upgraded its outlook for the full year, saying blended same-store sales are expected to rise 3 percent at company-owned domestic locations, with revenues expected to increase 4 percent to nearly $4 billion, despite macro-economic headwinds.

“This speaks to our ability to continue to take share in a highly fragmented and competitive market with the drivers we have in place to grow the right way: by increasing traffic,” said Elizabeth Smith, Bloomin’ Brands chair and chief executive.

For the quarter ended Sept. 30, the company reported a net loss of $33.8 million, or a loss of 31 cents per diluted share, compared with earnings of $1.4 million, or 1 cent per diluted share, a year ago. However, the results reflect expenses tied to the IPO that was completed in August, in which Bloomin’ Brands netted about $142.5 million, all of which was applied to retirement of debt. Adjusted for such costs, the company earned 8 cents per share, compared with 2 cents per share a year earlier.

Revenues increased 2.7 percent to $952.9 million for the quarter, and blended same-store sales rose 3.6 percent at company-owned domestic restaurants among the company's four core concepts, driven by a 2.5-percent increase in traffic.

Outback — the company’s largest chain with 970 units globally — showed the strongest domestic company-owned same-store sales growth, with an increase of 4.5 percent for the quarter. Smith attributed those results in part to the addition of a weekend lunch, tapping for the first time into what she described as a $24-billion daypart.

Weekend lunch has rolled out at both Outback and Carrabba’s, and the company plans to expand lunch to weekdays at both brands where it makes sense — which will ultimately be about 40 percent to 50 percent of the fleet, Smith said, noting, “It’s not appropriate everywhere.”

Outback’s traffic also was boosted by the promotion of a four-course meal for $15 during the quarter, as well as ongoing remodels, which have given the steakhouse units an average sales lift of 3 percent. During the quarter 54 Outback locations were refreshed for a total of 139 so far this year.

The 167-unit Bonefish Grill chain’s same-store sales rose 3.5 percent, boosted by the addition of brunch and a summer promotion with lobster.

The 233-unit Carrabba’s Italian Grill saw a same-store sales increase of 1 percent, driven mostly by a higher average check. Smith said Carrabba’s “Cucina Casuale” menu section introduced last year, with 11 items starting at $10, hasn’t had the traffic impact the officials had hoped for. He noted that the company is continuing to work on the menu to broaden its appeal, looking for ways to make it “more affordable and lighter.”

Carrabba’s is also in line for remodels, which Smith said will also improve that chain’s results.

During the quarter, Bloomin’ Brands opened five new Bonefish Grills and two Carrabba’s, and is on track to open 21 domestic locations, short of the previously announced goal of opening a total of 24. Three new restaurant openings have been pushed into January to avoid the busy holiday season, Smith said.

In Japan, however, the company sold nine restaurants to franchisees.

Bloomin’ Brands operates or franchises a total of 1,456 restaurants, including the four core brands and 22 locations of Roy’s, a casual-dining concept offering Hawaiian fusion cuisine.