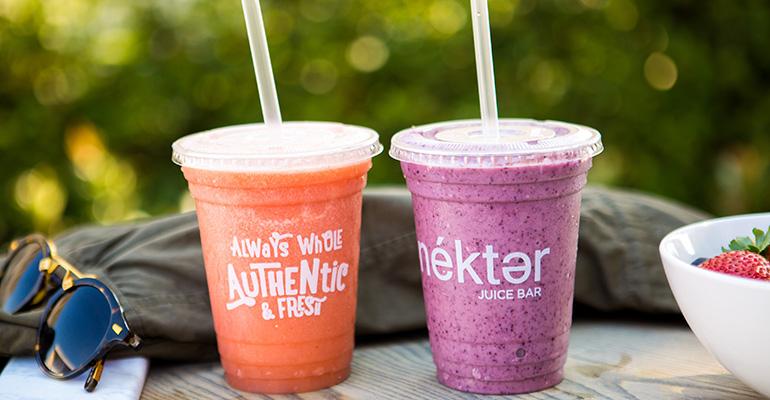 The smoothest operators are whipping up a blend of real ingredients, powerful superfoods and transparency

Consumers today are asking more from their smoothies.

The freshest idea in smoothies is one of performance-boosting, wellness-enhancing purity. Clean, whole ingredients are in; extra sugar and fake stuff is out.

Disillusionment with the smoothie’s sometimes-false promise of health is what led Steve Schulze and his wife Alexis to start the juice-and-smoothie concept Nékter Juice Bar in 2010.

“There are too many processed foods and too much junk out there,” Steve Schulze said. “At the time, we had young kids. And we did a review of old school smoothie bars and they had so many fillers and processed ingredients that you’d be better off just having a milkshake.”

The Schulzes’ mission seems to have struck a chord: The Santa Ana, Calif.-based chain has grown to 66 locations in Arizona, California, Colorado, Nevada and Texas.

Nékter is part of a new generation of smoothie makers, tapping into the clean-label trend that many consumers are seeking out, as well as food with benefits.

Along with ingredients that pack a powerful nutritional punch, true smoothie nirvana comes from a mix of ingredient transparency, friendly employees who can educate customers about unfamiliar superfoods, an inviting setting and ingredients that you want to shout from the rooftops, not hide in the reach-in. Losing the fillers and sugar

Wild Living Foods, a vegetarian restaurant in downtown Los Angeles, has a cool, tribal vibe and a super-strong smoothie game. Here, the smoothie’s sugar bomb past is left in the dust with a cutting-edge line of “Activated Smoothies."

“Activated Smoothies take the power of superfoods and the ancient science of herbology and combine them to achieve an alchemy of spiritual and physical benefits,” owner Rich Torres said.

“It’s important that we don’t start adding sorbets and concentrated juices,” Gilad said. “We don’t use any ice — frozen fruit can add the texture — and we don’t use binders like soy lecithin.” Balancing familiar flavors with bitter or strong-tasting superfoods to create classic flavor profiles is something Torres of Wild Living Foods is especially proud of.

“For example, with our Creamsicle smoothie, we were able to utilize the tartness of the camu camu [a cherry-like superfood from the Amazon rainforest], blend it with coconut meat and twist it into an orange creamsicle flavor that defies the senses,” he said. At Vitality Bowls, the balance of craveable flavor and nutrition is also a key consideration, Gilad said.

“I think healthy foods are the future, but people still want something that tastes good,” said Gilad, who founded Vitality Bowls with her husband Roy in 2011. “We have such a good mix in our customer base. Many people are trying to live a healthier life, but not everyone wants a kale salad.”

Smoothies at Vitality Bowls — made with real fruit and vegetables, no concentrates and no ice — are formulated to have high nutritional content.

“Other places may have a ‘peach blast smoothie’ that’s just peach juice, sorbet and a banana,” Gilad said. “We want our smoothies to taste good, but we want them to be good for you. Most of our smoothies aren’t overly sweet. Ours taste more like real fruits and vegetables instead of sugar. But even kids like them. I coach soccer and basketball, and when I show up with smoothies, they go crazy.”

Green smoothies can be a little scary for those who want to incorporate more leafy greens into their diet, but not if they have to choke them down.

“People have a longtime fear of green smoothies,” Schulze said. “I think at Nékter, we’ve helped change that through the way we’ve formulated our drinks and their flavor profiles.”

He called the chain’s Popeye’s Açaí smoothie a gateway into green smoothies because it uses spinach, which is milder than kale.

“Customers can evolve into a bigger, greener smoothie with Popeye’s Açaí,” Schulze said. “We push them a little bit. It’s part of the education process. Where we’re going next is the hybrid smoothie: Fruits and vegetables mixed together, providing fiber and density. If you go too exotic in the beginning, people will be intimidated. We want to gradually educate and not scare anyone away.”

Making smoothies accessible is another element that’s a great addition to the mix.

“Years ago, you had the traditional smoothie place and then a more elitist-type juice bar in New York or San Francisco or L.A. — the high-end, exotic stuff,” Schulze said. “I think a lot of people want to be hip, but our goal was to be available to anyone and everyone. At first, we thought we’d open maybe 10 or 12 units along the [California] coast. But now, our locations in Texas are off the charts.”