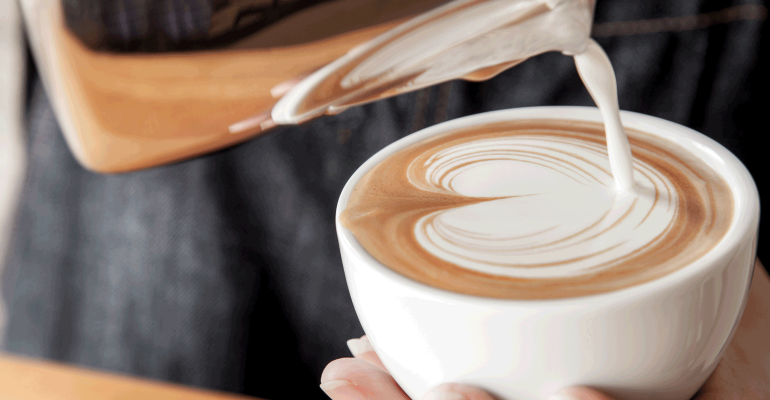 A heady coffee culture is brewing

Here are three trends caffeinating the world of java

The coffee industry is in the throes of a revolution.

Third-wave coffee, sustainable sources, gourmet brews, hyper-local messaging and the continuous elevation of the humble cup of joe have coincided to create a diverse and buzzy coffee culture in the U.S.

More than half of American adults drink coffee every day, and out-of-home coffee consumption hit a high of 46 percent this year, according to the National Coffee Association. Nearly 60 percent of coffee consumed daily is considered gourmet.

Take a look at three trends that are brewing:

Baristas: The next celebrity chefs

The adrenaline of competition. The hiss of steam from the espresso machine. The gurgle of the milk frother.

Coffee competitions are gaining prestige and prominence, and they’re elevating the status of baristas. If gourmet coffee continues to grow in the U.S., baristas could become as familiar as a celebrity chef, mixologist or sommelier.

This year, Kyle Ramage of Mahlkönig USA in Durham, N.C., was named U.S. Barista Champion. His winning cup was brewed from a Panamanian coffee that is priced at more than $100 per pound at retail.

The competition has three parts, with contenders expected to make a few different coffee drinks. For one drink, Ramage combined espresso, dark honey simple syrup and tea brewed with hops.

After winning the U.S. competition, he traveled to Seoul for the World Barista Championship. As of press time, the results were not yet available.

In addition to competitions, residencies starring baristas from hip coffee shops are popping up. Joel and Leticia Pollock of Panther Coffee in Miami starred in a month-long residency at La Marzocco in Seattle last November. The husband-and-wife duo founded Panther Coffee in 2010, after working in the industry for years and recognizing a need for specialty coffee in the city.

The Pollocks created two blends for the residency — East Coast and West Coast — based on the preferences of coffee consumers in those regions. Also on tap were a Cold Brew Nitro coffee; the espresso drinks cortado and cortadito; single-origin coffees brewed in a Chemex; and Cascara Soda, made with a syrup derived from coffee-cherry husks and mixed with sparkling water.

“Standards of beverage preparation in the bar have elevated as the international conversation of modern specialty coffee continues to weave itself into the fabric of the international culinary world,” the Pollocks told La Marzocco’s blog.

La Marzocco says it will host a special barista residency every month.

These days, how coffee is described on a shop’s menu can be just as important as the brew itself. Coffee shops are taking cues from the world of wine when describing a coffee’s qualities and origin.

Take a look at the beverage lineup at Oddly Correct, a coffee shop in Kansas City, Mo. A section titled “Brew Bar” lists not only the origin of the coffee, but tasting notes that would be right at home in a sommelier’s files. The Los Pozos Pacamara from El Salvador is described as having the flavors of sugar cane, green grape and toffee, while El Embajador from Huehuetenango, Guatemala, has notes of milk chocolate, caramel and apricot.

Oddly Correct is also a place for coffee purists. Its website urges customers, in all caps, to “fear not black coffee.” Additionally, it notes that it only serves coffee without milk and sugar. But in its early days, the coffee shop kept a small container of half-and-half on hand for customers who couldn’t do without.

“Every time we did it, we felt like we were living a lie,” said roaster Michael Schroeder. “We didn’t want to do it, but if we really want to push the status quo of what people can perceive coffee as, let’s just get rid of the cream and, in the most hospitable way, we can ask people to take that chance and come along with us and be their Yoda in journeying into enjoying coffee without cream or sugar or flavored syrups.”

Coffee cocktails are maintaining buzz after a couple of years trending on drink menus.

Mixologists are tapping coffee’s complex flavors to create sophisticated cocktails. Blueprint in Brooklyn, N.Y., serves a Kickstarter with turbinado-sugar-sweetened espresso, rum and coffee bitters; The Franklin Mortgage & Investment Co. in Philadelphia offers For Closers Only, consisting of green chartreuse, Laphroaig 10, Black Grouse, cold brew coffee, cream, orgeat and demerara; and a “grown up” spiked espresso will be offered at the Boston Hot Chocolate Experience through Feb. 14, 2018, to name just a few.

Some coffees are also getting spiked with extra caffeine, like Brooklyn Water Bagel’s new iced CinaBuzz variety, which has 50-percent more caffeine than standard coffee. Roastmaster Christopher Conover said he’s been working for 10 years on a higher-caffeine coffee that retained a pleasant flavor. Arabica coffee is prized for its flavor, but has lower caffeine, while Robusta coffee has more caffeine but a less pleasing taste, he explained.

“Instead of using a low-grade coffee, I use high-grade specialty coffee and add caffeine after the roasting process,” Conover said. “You get the boost and the flavor.”

In addition to the cinnamon-flavored CinaBuzz, Conover is also working on four more flavored coffees with pumped-up caffeine to satisfy the craving for iced coffee of Brooklyn Water Bagel’s customers. The concept is also known for using ice cubes made of coffee, to prevent dilution of cold coffee drinks.

“What’s popular now is iced coffee,” Conover said. “The store connected to the roastery is going through 900 pounds of coffee ice cubes a week.”