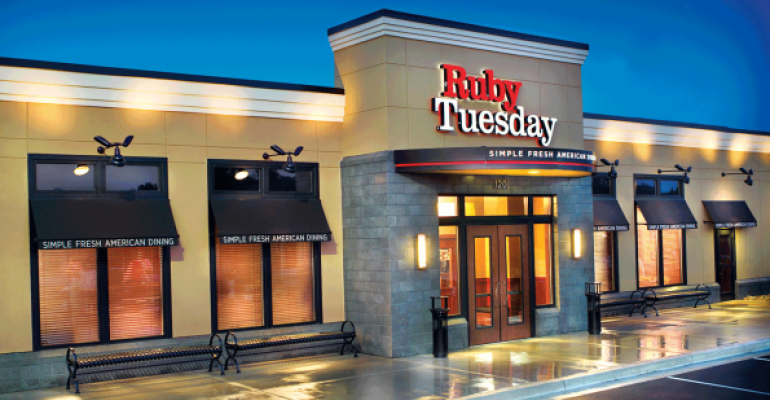 Blog: Buyers will be there, thanks to the chain's real estate

This week, Ruby Tuesday ended years of speculation by all but putting a for-sale sign on the outside of its 613 restaurants.

Investors cheered the move, bidding up the stock by more than 24 percent on Tuesday, and then another 7 percent on Wednesday.

Ruby Tuesday’s stock, even after that surge, is still down by more than a third since last fall, and less than half of where it was a year ago. The chain has struggled to generate sales growth for more than a decade, and operates in arguably the restaurant industry’s most depressed sector: bar and grill.

Yet there will be buyers, thanks to its real estate.

Ruby Tuesday has a market cap of about $120 million, and an enterprise value of about $300 million. Yet it also has property assets of about $600 million, mostly from the ownership of 300 locations.

Thus, for a cash price of, say, $150 million, you could get a chain that generates $1 billion in revenue per year. And if you can’t make that work, then you can just sell the real estate and double your cash.

“What’s your risk?” said Craig Weichmann, partner with Meyer Metz Capital Partners. “You can double or triple your money just by moving the property.”

Ah, but it’s easier said than done, for Ruby Tuesday is no easy fix.

The chain was founded in 1972, named for the song by the Rolling Stones. It grew rapidly in the 1990s and 2000s as part of a generation of bar-and-grill chains that promised consumers good times and an irreverent attitude.

Yet it is the smallest fish in a currently shrinking pond. As we wrote about last week, bar-and-grill chains are in decline, a victim of consumer trends and arguably over-stored. And Ruby Tuesday is smaller than its competitors in that sector, Applebee’s, Chili’s and TGI Fridays.

Ruby Tuesday’s decline started in 2006, when sales began to fall. Annual same-store sales have increased only one year since the company’s 2007 fiscal year — 2011, which was also the last year that Ruby Tuesday generated a profit.

The consistent sales losses have taken a bite out of average unit volumes, which have fallen from $2.12 million in 2007 to $1.64 million in the company’s most recent fiscal year. They’re falling further this fiscal year: In the chain’s first three fiscal quarters through February, same-store sales have declined about 3.6 percent.

At the same time, the chain is closing locations. The company and its franchisees closed more than 100 units last year. The unit count is down 35 percent, from a peak of 945 locations in 2009 to 613 restaurants today.

In other words, Ruby Tuesday is about half the size it was a decade ago.

Any buyer would have to contend with that history, as well as the challenged casual-dining segment in which the brand operates. And the buyer’s cost would not be limited to the cash it pays shareholders: There is the question of the $200 million in debt, and then making investments in the brand to spruce up restaurants and build sales.

And Rockwell noted that there are questions about the value of the real estate that would come in any deal. Ruby Tuesday has already sold many locations to investors in sale-leaseback deals. Presumably, the locations sold are the better performing units.

There are some cost savings available. About 10 percent of the company’s revenue goes to sales and general and administrative costs, and a buyer would likely want that reduced.

Some buyers are certainly willing to take their chances on chains with assets. Golden Gate Capital, for instance, recently agreed to buy the 523-unit Bob Evans Restaurants for $565 million. Also, chains have come back from seemingly difficult circumstances to become powerful brands.

This is the restaurant industry. Restaurant brands have some value, and they generate cash. There are always people willing to take a chance on that.