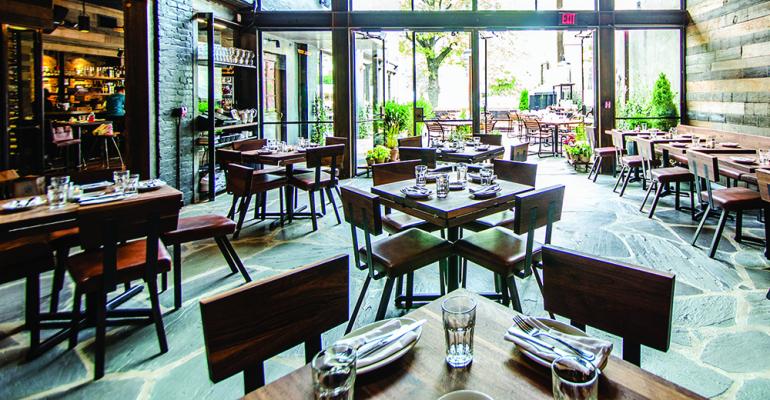 Norwalk, Conn.-based Barteca is parent to the Barcelona Wine Bar and Bartaco chains.

“We believe Barteca’s innovative and ‘best-in-class’ concepts are highly complementary and will provide Del Frisco’s portfolio with significant growth and development opportunities. They will provide opportunities to enable us to capture market share in the experiential dining segments, while mitigating the risk of seasonality and economic downturns to our current restaurant portfolio,” said Norman Abdallah, Del Frisco’s CEO, in a statement.

Del Frisco’s board unanimously approved the transaction, which is expected to be completed by the end of the second quarter, subject to antitrust clearance and other closing conditions, the company said. The proposed transaction does not require approval from Del Frisco’s shareholders.

For Barteca CEO Jeff Carcara, the deal is somewhat of a homecoming. Carcara joined Barteca in 2015 and served previously as Del Frisco’s chief operating officer.

Carcara will remain CEO of the Barteca brand division and will report to Abdallah. Barteca will operate autonomously and maintain its own personality, Abdallah said in a call with Wall Street analysts.

“We have tremendous brand pride across Barcelona and Bartaco. The excitement about our growth and potential is palpable in both our new and existing restaurants,” Carcara said in a statement. “I believe Norman and the team at DFRG share in the vision for what’s possible in terms of our evolution. There is strength in numbers, and I am excited to see what more we can accomplish together.”

The acquisition comes as Del Frisco’s reported a consolidated 3.6-percent same-store sales decline across its Del Frisco’s Double Eagle Steakhouse, Del Frisco’s Grille and Sullivan’s Steakhouse brands, largely due to a 9.3-percent drop in traffic during the first quarter ended March 27. The decline in customer count was partially offset by a 5.7-percent increase in average check.

Del Frisco’s is considering selling Sullivan’s Steakhouse, the company said earlier this year, and Abdallah said the company expects to announce a buyer within the next 60 to 90 days.

The company also plans to close four underperforming Del Frisco’s Grilles and two Sullivan’s Steakhouses this year, including a Sullivan’s in Austin, Texas, that has already closed.

Barcelona Wine Bar has 15 units and Bartaco has 16 units across 10 states and Washington, D.C. Both chains are growing. Barteca generated $127.9 million in net sales in 2017 and $31.7 million in restaurant-level earnings before interest, taxes, depreciation and amortization, or EBITDA, representing a 24.8-percent margin, the company said.

Barcelona Wine Bar is a Spanish concept serving tapas with a lengthy wine list from Spain and South America. The brand boasts 46 percent of sales from beverages, which Abdallah said will fit well with the bar-focused portfolio. Three more locations are in development, and the company estimates 50 to 100 more restaurants.

In 2017, Barcelona Wine Bar generated $60.2 million in net sales, with same-store sales rising 1.9 percent for the year. The average unit volume was $4.7 million, and the average check was about $35 per person.

Bartaco is an upscale global-street-food concept with a market potential of between 200 and 300 units domestically, the company said. In 2017, the chain reported $67.1 million in net sales, with same-store sales rising 7.3 percent. Bartaco restaurants had an average unit volume of $5.6 million that year, with an average check of $22.

Carcara said Bartaco has the advantage of a busy lunch business and the midafternoon is becoming a differentiating daypart for the brand.

“The margarita is the next coffee,” said Carcara. “We’re seeing people using Bartaco in the afternoon like it’s the next Starbucks.”

Abdallah added that Barteca’s smaller restaurant footprint and lower average check gives the company more flexibility with development while benefitting from the shared services and infrastructure of partnering with a larger company.

“It’s really the best of both worlds,” he said. “It has the entrepreneurial feeling of a small brand with the support and structure of a disciplined larger organization.”

“Barcelona and Bartaco are the perfect additions to the Del Frisco’s portfolio, and are well positioned to deliver a long-term positive impact on our team, guests and shareholders,” he said.

Abdallah blamed the decline on bad weather, cost increases from menu enhancements and beef inflation, but said labor costs benefitted from the implementation of Hot Schedules for scheduling.

Same-store sales declined 2.8 percent at Double Eagle, consisting of a 6.7-percent decrease in customer counts offset by a 3.9-percent increase in average check. Sales were impacted by comparisons with the Presidential inauguration a year earlier and the shift of the Super Bowl from Houston to Minneapolis, the company said. Excluding weather and the rollover impact, same-store sales would have been slightly positive.

Same-store sales fell 1.4 percent at Del Frisco’s Grille, including a 7.1-percent decline in customer counts offset by a 5.7-percent increase in average check.

Sullivan’s Steakhouse saw same-store sales drop 10.3 percent, including a 20.7-percent decline in traffic offset by a 10.4-percent increase in average check. Sales were impacted negatively by the elimination of lunch service during the second quarter 2017.

Consolidated revenue increased 6.5 percent, to $89.3 million in the first quarter, primarily due to an additional calendar week in 2018.

Abdallah said 2017 was a year of transition, but 2018 will be a year of growth, portfolio optimization and value creation. Sales trends were improving in the second quarter.

“With the onset of spring and winter now firmly behind us, we are encouraged that sales trends have improved in all three brands during the first five weeks of the second quarter on a sequential basis,” Abdallah said in a statement. “We believe that this improving momentum, coupled with the timing of the marketing expenses that weighed down the first quarter, positions us within our 2018 guidance range for adjusted net income, exclusive of the impact of the potential divestiture of Sullivan’s and the proposed acquisition of Barteca.”

Update May 7, 2018: This story has been updated with additional comment from Del Frisco's executives.