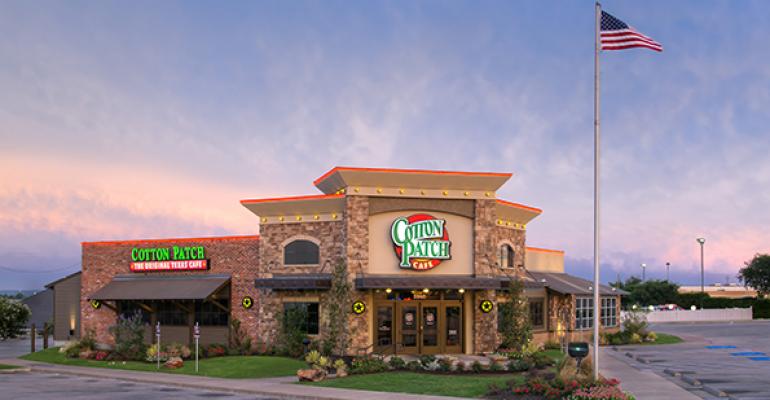 Deal to support 45-unit chain’s “next phase of growth”

Terms of the deal between Palo Alto, Calif.-based Altamont and Grapevine, Texas-based Cotton Patch were not disclosed.

“Cotton Patch has been successful through its focus on value, high-quality food, Southern hospitality and the local community around each restaurant,” Jonathan Altman, a principal in Altamont, said in a statement.

He added that Altamont was eager “to support the management team throughout the company’s next phase of growth.”

Kathy Nelson will continue in the role of Cotton Patch CEO, and also invested in the Altamont transaction, the companies said.

“We look forward to building on Cotton Patch’s strong legacy and see attractive opportunities to expand the concept both in existing and adjacent markets,” said Nelson, who has worked in leadership positions at Pizza Hut, Pillsbury and General Mills.

Cotton Patch, found in 1989, is known for its menu of Southern-influenced fare, including fried pickle appetizers, $5.49, fried catfish with hushpuppies, $10.99, and Dr Pepper Chocolate Cake, $4.49. A popular long-running promotion is the Monday night special of chicken-fried steak or chicken-fried chicken, for $7.99.

“We believe there are many customers that would appreciate our quality, scratch-made Southern food offered at a value price,” Nelson said. “Altamont’s experience in the restaurant industry will be a great resource in helping us execute the company’s plans.”

In 2014, Cotton Patch opened new restaurants in the Texas cities of Athens, Grapevine and Greenville. The concept was founded in Nacogdoches, Texas, by Larry Marshall and Michael Patranella.

“The idea behind the first Cotton Patch Cafe was to create a local restaurant that offered great food made from scratch, served by caring folks who are part of your community,” the founders said in a statement. “That culture still holds true 25 years later, and we are confident that Altamont is the right partner to help bring it to many more communities in the future.”

Randall Eason, co-founder and managing director of Altamont Capital, said in an email that “we are excited to be partnering with an excellent management team that is passionate about continuing to grow the brand within Cotton Patch’s core Dallas market, throughout Central and Southern Texas, and in other nearby states.”

Altamont Capital ranked No. 123 in the 2014 Nation’s Restaurant News Second 100 report, with a reported $277 million in annual revenue for the December 2013-ended fiscal year. That revenue included Tacala Cos., which franchises Taco Bell, and Boom Holdings Inc., which franchises Sonic Drive-In.

In mid-December 2013, Altamont Capital acquired Austaco Ltd. of Austin, Texas, with 80 Taco Bell and Taco Bell-KFC restaurants, for an unspecified amount, giving the company a total of 255 Taco Bell and related co-branded restaurants in seven states, and 65 Sonic locations in four states.