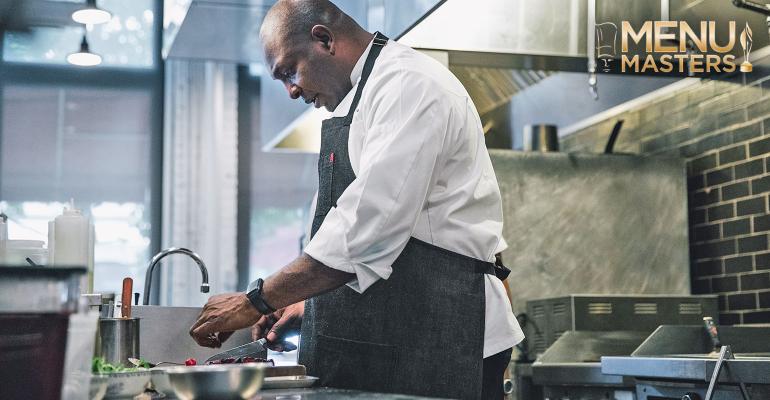 “We have to rethink how the bottom line can both reflect how we take care of people and create equitable space.”- Erick Williams

After thirty years in the industry, Chef and Restaurateur Erick Williams has learned one thing. You never stop learning. Beginning his fine dining career as a salad cook at Chicago’s legendary MK and working himself up the ladder to Executive Chef and Partner to owner Michael Kornick, Williams learned his craft on the job and many lessons along the way about how to run a business and build a team.

When MK closed, Williams was able to pursue creating his own place, eventually opening Virtue in Hyde Park on the South Side of Chicago in 2018. Many of his key team members who began with him at MK and are now essential partners in Virtue’s success. Rave reviews and accolades, like a Michelin Bib Gourmand and a James Beard nomination for Williams, followed within the first year of opening, and a recent CBS Saturday Morning piece went viral for his passion about centering the food of the Black diaspora in his restaurant, but Williams points in a different direction when asked about what feels like a win to him.

“Developing people, there's our strength. The people that I have relationships with that have been produced through our programming. I think we've done really, really well. There's some there's some really good chefs. But even better, good human beings on the street. We teach being organized, having good habits. We teach that it doesn't matter if you are Harvard educated, or trained in business, or if you just learned in the school of hard knocks. The better your habits are, the better your day-to-day practices are, the better your performance is going to be.”

The location of Virtue on the South Side of Chicago, and the menu which finds it roots in Southern cuisine through the lens of the Great Migration and Chicago soul food were not accidental. Williams wanted his restaurant to sit proudly in this community, recognizing that there was nothing else like it in the area. His research before settling on the space included sitting in his car at all hours of the day and night with a counter, clicking numbers for foot traffic, getting a sense of the viability of the location, eating at all of the restaurants in the area, figuring out what was missing. Hyde Park is a dynamic neighborhood, with the University of Chicago campus set within a predominantly Black area. At any given night at Virtue, what will strike you is the effortless diversity of the diners, a true snapshot of the city, with young students on a special night out sitting next to local families having a midweek meal, diners who have traveled from the northern suburbs and from across the country to experience exquisite food, and warm hospitality.

“Virtue means of high moral standard.” Williams says. “It might have become something of a cliché, but for us, patience is truly a virtue. What does service feel like if it's timely and patient? Patience is big with us. Kindness is big with us. Hospitality is big with us. It's also the cornerstone of my value-based practice, so it's intertwined. It feels like your service is tailored to you a lot more, and that's before we ever get to the story or the culture of cooking southern food.”

He is devoted to ensuring that within the walls of his space, everyone is heard, and that the patience he teaches is a big part of that.

That listening creates a strong culture of creativity for the staff at Virtue. Everyone is encouraged to work on new menu items, to bring in their traditions and cultures, their passions, and put them on the plate. This collaborative approach to development keeps Williams on his toes when it comes to menu innovation.

“It's really just about the encouragement of them producing. I want these guys to own their own places someday. I don't want to be in their way. I don't need to battle for space on a menu at this point in my life or recognition. I actually like when the chefs are producing a high enough level that it kind of makes me a little jealous and then it gets my own creative juices flowing! Then there's kind of a friendly competition on who can make the better thing. That is good for everyone, for the cooks, for me, and for the guests.”

Williams is very open about this desire not just to train the next generation of Black chefs; he wants to train the next generation of Black restaurant owners. The day-to-day work of the restaurant, while certainly focused on food and service, also has elements of being an incubator of talent. Williams knows that by working in this way, he is essentially training his people to eventually leave to pursue other endeavors, and that to him is a mark that he is doing the best he can for his team.

“I just think it's the right thing to do. I don't necessarily know if it creates a specific exit strategy, to be perfectly honest, anybody can leave at any time, right? We're not holding anybody hostage in a restaurant. But what we want to identify is opportunity. And we want to throw all of our resources behind our team, so we make an initial investment in training and support, and growth. We share our knowledge and experience, that is an investment in them and their careers. Then we expect a return on investment. And part of that return on investment is a commitment to sustainability of the brand, and being part of creating the space that is supporting you. People earn a living here, and they should be committed to others earning a living here, and they should be committed to this place being profitable and the best iteration of itself that it could be. If you are a part of that? Then you get into the high-level access, which is access to investors, access to capital, access to profit and loss statements, access into systems, and back-office practices. We want our team to understand those all of those and have all of that access. And when it's appropriate we also want to let them know that we are willing to make it available to them in a way where they know that they have our support.”

For Williams, he looks at Virtue as the first home purchased for a family. That house, that land can be both passed down to future generations, but can also be built upon, expanded, and grown. For some, inheriting a family house or piece of land is enough, to continue tradition, to stay rooted. But for some, it is the lessons learned while growing up in the house that give them the experience to leave and build their own house somewhere else. Williams hopes that as those new houses come to be, they are an extension of the philosophy that is at the center of the Virtue brand.

“The resources and the expertise then can transfer in a way that keeps things sustainable, but also keeps the ownership in the hands of those that have worked to keep this thing afloat. It’s a little different than land that family has purchased and or passed down. But similar in theory. In the restaurant we call our people family members. So why shouldn't they benefit from the fruits of their own labor? So that doesn't mean they have to, but if they want to, we just want to make it the easiest possible lift. We feel like we've done a lot of the hard work, and they have been a part of that, so why not position them to be in a place of both ownership, and also access? Why should it be a sendoff party when they decide they want those two things? There are ways where the brand continues to benefit from their ingenuity. From their new perspectives, their innovation. It feels like a windmill kind of ideal to me. Where things still feel very circular, but they continue to produce energy.”

Williams is excited for the change he feels is coming for the industry and hopes that the work he is doing with his team at Virtue can be a part of shifting the focus and making important and sustainable change.

“If we're not going to make consciousness and equality and empathy part of our bottom line that we're going to continue to suffer losses as a result of trying to make huge gains. We're at a crossroads where we have to rethink how the bottom line can both reflect how we take care of people and create equitable space. We create spaces where there is a purpose, and also, we see that purpose as a value at the bottom line and we don’t consider value only being a dollar sign. We're at a point where we're now asking ourselves if someone wins, who's losing? And how great is that loss? And there is a way to do business where it can be a win/win. It takes an immense amount of focus to perform at that level, where we don't leave people behind. And that's what we work really, really hard to do as an independent restaurant. And we believe that we're making impact based on the results that we're seeing.”

Sharon Lykins Wants YOU to Join the Culinary Workforce
Dec 10, 2021

Chefs Sarah Grueneberg and Stephanie Izard serve the needs of their guests by putting their teams first
Nov 12, 2021