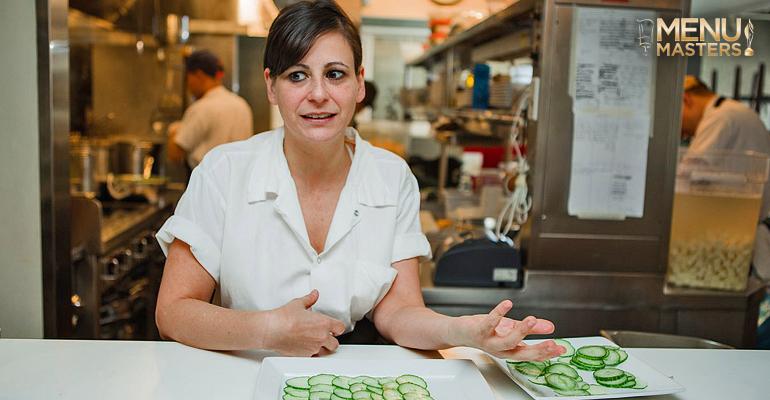 For Chef Amanda Cohen, everything is out in the open

“We get to think of ourselves as pioneers. And there's not a lot of rules. So, we can break them all, and create them, all at the same time.” — Amanda Cohen

A degree in cultural anthropology might not be the obvious starting place for a James Beard nominated chef, but chef/owner Amanda Cohen of Dirt Candy in New York has never been one to take the obvious path. A lifelong interest in food and cooking led her to a transitional job in restaurants post-graduation, as she figured out what her next steps should be. But the work felt natural to her, and eventually her passion led to cooking school and a long career in other people’s restaurants. It wasn’t what she set out to be, but she listened to her gut when the path felt like the right one. “I kept growing and learning and ascending the hierarchy,” Cohen says “and one day I realized I was a chef. It wasn’t what I set out to do, but I couldn’t be happier.”

Although the Canadian-born chef and cookbook author of Dirt Candy: A Cookbook was a vegetarian for fifteen years, as she worked to become a better cook, she is not a vegetarian anymore, despite running a fine dining vegetarian restaurant. “I realized at some point that in order to come better chef, I really needed to start eating what chefs cared about cooking and what everybody liked to eat.”

The impetus for Dirt Candy being a vegetarian restaurant was more about seeing a hole in the market and a personal desire to be creative than a philosophy around plant-based eating. After 15 years in the industry, she had a clear vision for what she might be able to achieve.

“Vegetables were definitely an afterthought on most menus, as were vegetarians. You know, the truth is I like vegetables. It allows us all to be really creative. I think that’s the hallmark of Dirt Candy — really creative food, and I really don’t know how I would be creative with steak. But I look at a carrot and there are a million possibilities that I see and part of it is that people haven’t done it before, not the way we’re doing it. We get to think of ourselves as pioneers. And there's not a lot of rules. So, we can break them all and create them all at the same time. There is no specific ethos behind the restaurant, except that we like vegetables, and we want to serve good food. People think we were in this little box because we only do vegetables. But to me, I think it gives us so many more tools to play with than if we also included animal protein.”

The first iteration of Dirt Candy was a small version of the restaurant she has now. It was 18 seats, 350 square feet, a tiny space full of big ideas. “It was sort of built to fail almost.” Cohen admits. “We didn't know if it would be successful, but I figured, if it was that small, even if I was completely unsuccessful, I could run it on my own for a number of years.

Certain things from that first space stick with her. My ability to Tetris-pack shelves is pretty amazing, because we had almost no storage and it really taught us about customer interaction.” The small space meant that Cohen and her staff needed to figure out how to manage a dining room. Without an open kitchen, she was always conscious of the fact that she didn’t want to make it seem like two different rooms. The energy she wanted eventually led her to the current space, with its open kitchen format, which Cohen says is key to the Dirt Candy experience.

“I don’t personally like it when I go to open kitchens and it’s a serious meal and everybody's so quiet and it’s such a somber play that I'm watching. When I go for dinner, I wanna have fun. I love it when my kitchen is chatting and talking with each other and having a good time. I mean, I want them to be working, but I want them to be having a similar experience as the diners are having and vice versa. I want the whole room to feel like a party and that’s the whole point of the restaurant.”

That idea of no “front of house/back of house” separation and having full integration between the guests and the kitchen, means that the entire staff is an active participant in creating the mood and energy of the restaurant, and engaging in a meaningful way with the diner experience has also led to a staff with strong and positive communication skills. The team is always cognizant of the eyes of the guests, and it puts them in a mode of also being mindful about how they communicate and interact with each other and react to unexpected circumstances. Cohen acknowledges that it is a habit that goes beyond service. Once you get used to always thinking about the kind way to say something or being sensitive to how someone else might take something, it trickles into your general life.

“We always have to watch what we’re saying and we’re always aware of what they can see. We try to run a pretty calm and even-keeled kitchen, and everybody's pretty nice to each other.”

Cohen thinks that a part of her team being able to maintain that positive energy starts with creating a positive work environment that allows them to have a life. It was important to Cohen to be leading at the forefront of labor issues. She pays a living wage. She was one of the first to adopt a no-tipping policy. She offers health insurance, and paid days off and sick days. And perhaps most importantly for both herself and her team, she believes in work/life balance, and keeps the restaurant closed on Sundays and Mondays to give everyone a two-day break. Cohen tries to limit herself and her staff to a fifty-hour week. As such, while Dirt Candy is not impervious to some of the labor shortage the industry is facing, she has an excellent retention rate on staff.

“Whatever I can do to keep them interested in working here is absolutely worth it.”

Some of that interest comes in innovating new seasonal menu offerings. There is a lot of collaboration around new dishes, and when a new menu is about to launch, Cohen closes the restaurant for a couple of days to retrain all the cooks and all the front of house staff.

“It’s a time when we usually all sit down and regroup and have big meetings and sort of plan out the next three months with everybody.”

After a four-month closure at the start of the pandemic, Cohen was able to convert her tasting menu to a simplified version suitable for takeout. While she had always had two different tasting menus available, a larger 10-12 course version and a smaller 5 course, she streamlined to just doing the five-course. The takeaway lesson? By reducing to a single menu, her food costs dropped by ten percent. Recognizing that having that singular menu instead of different options was incredibly cost effective, when the restaurant re-opened for dine-in they decided to stick with it. She thinks that one of the benefits of the pandemic is that the industry took the opportunity to educate consumers on the realities of the business, the actual cost of food, the details that few in the general public knew about labor issues.

“I like that the 4th wall kind of came down a little and the secrets of restaurants were spilled. Not all of them, but a lot of them. People are really learning what it takes to run a restaurant and how important employees are and I do think people are coming to the restaurant with a little bit more of an understanding than they were four years ago.”

Her advice to early-career chefs? Don't rush it.

“The goal is the journey. Stay at jobs and learn the job. Don't hop around, don't leave every three months. That doesn't gain you a lot of respect in the industry. Learn as many different cuisines as you can because once you hit the upper echelons, you don't have that much time to learn. When you're young and take different jobs, as long as you stay at a job for at least a year, you really have the opportunity to learn so much. It's learning different styles of kitchens, fancy ones, not fancy ones. Ones where you learn open kitchens, closed kitchens, where you're on the floor or you're not on the floor, counter service. The more knowledge you can get as you're going through your career the more it'll help you.”

She also wants chefs to be patient with themselves. There is a certain pressure to take on the mantle of “wunderkind” and it doesn’t serve chefs well to assume they should have big jobs or open their own places too fast.  “I thought I was going to open ‘my’ restaurant by the time I was 25, and I was upset that I hadn't. Then by the time I was 27, or by the time I was 30 and it didn't happen. I was so angry at the time about that. And the reality is I wish I'd probably even waited a little bit longer.”

Cohen also thinks that there shouldn’t be such a focus on expansion once you are doing one thing well. She is not interested in empire building. “We do what we do, and we think we do it better than anyone else. And it's a pretty hands-on operation. So, it doesn't scale up and it needs a lot of love and attention. I think maybe 10 years ago, I would have thought about expanding, but right now this place functions. It works. It makes a little bit of money and I'm good. I think if we put any more of a burden on it, it wouldn't be the same.”