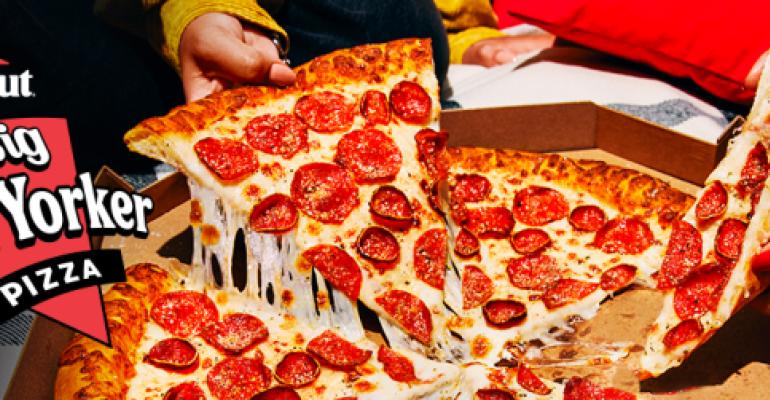 From the return of Taco Bell’s Mexican Pizza to KFC’s new twist on wraps from a couple of decades ago, ‘90s nostalgia has been fueling Yum Brands’ LTO schedule

You only have to look at the plethora of ‘90s and ‘00s television reboots hitting cable and streaming services to see the hold that Millennium-era nostalgia has over the current cultural zeitgeist. Last year, Taco Bell banked on the power of the reboot (especially with social media buzz) when the quick-service brand brought back Mexican Pizza as an LTO, and then thanks to outcry over product shortages and celebrity influence from Doja Cat, added the ‘90s favorite to the menu permanently.

Although Taco Bell is known for its buzzworthy product callbacks, the quick-service brand is not the only Yum Brands company to do so. In October, KFC brought back an updated version of its chicken Twister wraps after being discontinued for eight years.

Now Pizza Hut is getting in on this strategy with the return of The Big New Yorker Pizza announced Wednesday, which was first introduced in 1999 and retired two decades ago. The 16-inch pizza — topped with extra cheese, sweet marinara sauce, parmesan-oregano topping and double pepperoni — returns Feb. 1 as an LTO and is reminiscent of Pizza Hut’s menu items of the brand’s red roof days, which slowly closed over the years.

“The Big New Yorker was a huge hit when we launched it in 1999, setting the stage for future industry innovations like Pizza Hut Melts and Detroit-Style pizza,” Lindsay Morgan, Pizza Hut CMO, said in a statement. “At 30% larger than our large pizza, now is the perfect time to answer our customers’ requests and bring back The Big New Yorker in a big way right before the big game next month.”

Related: Taco Bell is bringing back Mexican Pizza for good

Pizza Hut is likely looking for a repeat of the wildly successful return of the Mexican Pizza, which was so popular that it was sold out in many stores long before its LTO run was over. A lot of this is pushed by social media buzz, which doesn’t seem to be quite as strong (or viral TikTok worthy) as the Mexican Pizza inspired, but still has fans excited for the return of the nostalgic item:

UH I'M SORRY, THE HYPE THAT I FEEL FOR THE BIG NEW YORKER PIZZA COMING BACK IS BONKERS?? I'VE HAD A JONES FOR THIS THING FOR 25 LITERAL YEARS. I hope the sauce recipe is the same.

Pizza Hut? You're officially my Valentine.

The Big New Yorker pizza is a landmark piece of my childhood. We had it every week as a family on Friday nights. #IWoreHuskyPantsAsAChild pic.twitter.com/AJ9oi4ZYVZ

Pizza Hut has plenty of ideas and menu items they can pull from the ‘90s and ‘00s if the return of the Big New Yorker pizza proves to be a success, especially since the company has had such a transformation from its earlier casual-dining days. In fact, we would not be surprised if Pizza Hut opened up a popup red roof restaurant, complete with original pan pizza, a buffet, and jukeboxes playing ‘90s tunes.

Although nostalgia is the major impetus behind Yum Brands’ push of long-retired menu items, it’s not the only reason. The announcement for the return of the Big New Yorker revealed that the company is listening to and engaging with fans in a fun and playful way, after noting multiple Change.org petitions and Reddit threads clamoring for the return of the oversized pepperoni pie. Creating LTOs based off consumer demand makes customers feel like they have a two-way relationship with quick-service brands like Taco Bell and Pizza Hut.

Of course, Yum Brands isn’t the only company to tap into the massive marketing potential of nostalgia. Although not necessarily menu items, McDonald’s reintroduced the Boo Buckets for Halloween in 2022, which were a massive hit in the ‘80s and ‘90s for trick-or-treating children. The quick-service giant’s adult happy meals, which were also released in fall 2022, were so popular, that they ended up overwhelming staff. On Jan. 9th, IHOP announced that the pancake brand would be bringing back its fan-favorite discontinued item, the Rooty Tooty Fresh n Fruity pancake combo for the brand’s 65th anniversary, proving that the nostalgia train has reached the casual dining sector as well.