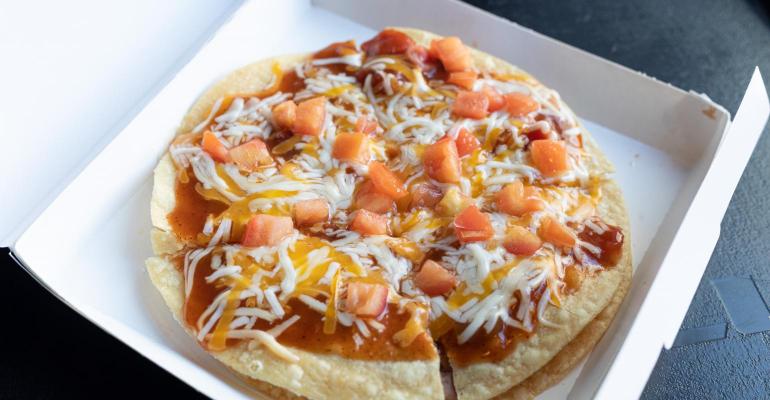 Taco Bell on Tuesday launched a web page to address the complaints that were coming in from Mexican Pizza-deprived guests.
News>Quick Service

About two weeks after the menu item was brought back with help from Doja Cat, it’s now missing from units across the country. Officials blame higher-than-expected demand.

Roughly two weeks after Taco Bell brought back Mexican Pizza to the menu — with the help of Doja Cat and Dolly Parton — fans are finding the item sold out in many restaurants across the country.

And they’re not happy.

Related: Everyone get ready for Taco Bell’s “Mexican Pizza: The Musical”

@tacobell 63601
I call BS
Went to get a Mexican Pizza for lunch and was told there isn't any and won't be back til September
What gives taco bell?

What the hell @tacobell? The #mexicanpizza is gone already?!

Officials with the Irvine, Calif.-based chain say demand for the menu item has been more than seven times what it was the last time it was on the menu prior to its disappearance in 2020. A Roseville, Calif. unit recently sold more than 1,000 in one day, a company spokesperson said, and one fan ordered 180.

That unexpected demand has created supply issues that the company said could take time to resolve — maybe until the fall — as the item will be added permanently to the menu. Taco Bell on Tuesday launched a web page to address the complaints that were coming in from Mexican Pizza-deprived guests.

“Because of the incredible love for the Mexican Pizza, we have begun selling out across the country,” the web page states. “Our restaurant teams trained for weeks for what we knew would be a big return, we just didn’t realize how big, and replenishing the beloved menu item is taking longer than we’d like.

“We’re working diligently with our restaurants and suppliers to get more back in the hands and stomachs of our biggest fans,” the web page continues.

Perhaps even more disturbing is the news that “Mexican Pizza: The Musical” was not ready by May 26, as previously planned. Scheduled to debut on TikTok, the musical version is said to star Parton with music written by the songwriting pair who also wrote “Bridgerton: The Musical.” It will tell the “harrowing” tale of the menu item’s return, a journey driven by customers who loved it — including Doja Cat and Parton.

No doubt the company thought it wise to wait on the TikTok debut until the supply chain issues are resolved.

“The show will go on, just not May 26,” Taco Bell states on the web page. It does not say when the show will appear.

Taco Bell took it and other menu items off the lineup in 2020 in a decluttering move, but a fan-led movement to bring it back resulted in more than 200,000 people signing a Change.org petition demanding Mexican Pizza’s return.

Wall Street analyst Mark Kalinowski of Kalinowski Equity Research, wrote in a report Tuesday that sales of the Mexican Pizza have been as much as four- to five-times more than the company anticipated.

Some Taco Bell stores have sold 500 or more Mexican Pizzas per day over the last two weeks — though before the menu item was discontinued in 2020, those same stores tended to sell only about 20 to 30 per day on average, Kalinowski wrote.

Kalinowski said the Mexican Pizza shortage is similar to that of the Popeyes chicken sandwich that caused a sensation in 2019, creating such demand that the item sold out within two weeks, sparking viral outrage known as #Popeyesgate. For a time, Popeyes launched a campaign directing guests to bring their own buns to recreate a version of the then-hard-to-find sandwich.

Kalinowski also predicted the Mexican Pizza shortage may last until the fall, as the company warned.

“It may take as little as two weeks for Taco Bell to (more or less) resolve the supply issue to keep up with the incredible demand, but it’s also possible that it may take until this autumn for supplies to be restocked,” Kalinowski wrote. “We’d guess this is an issue that will take a time frame measured in months (not weeks) to resolve.”