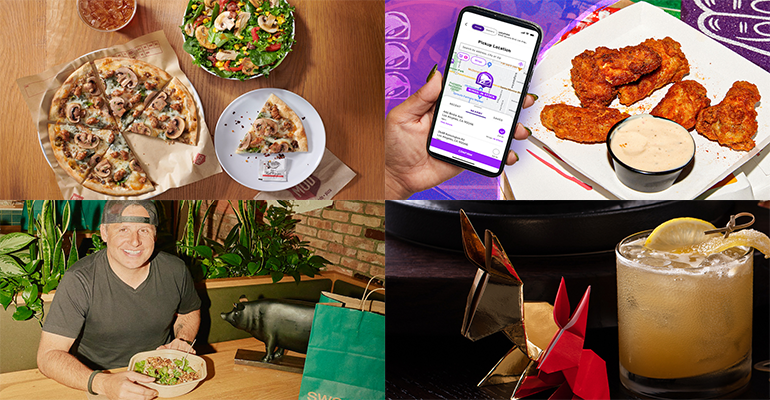 If you’re a world-famous rock star who has invested in a restaurant chain and a gin, it just stands to reason that you would make a cocktail out of that gin and sell it in your restaurant. Why it took Rock & Brews owners and KISS members Gene Simmons and Paul Stanley so long to have their Cold Gin mixed into a cocktail at the chain is unclear, but they’ve done it now.

P.F. Chang’s has a new cocktail, too, in celebration of the lunar new year and the approaching Year of the Rabbit, and California Pizza Kitchen has a new one for no obvious reason, but it certainly has an optimistic name.

Shake Shack is testing new half-sized shakes, and also has some new shake flavors, 7-Eleven has a blueberry-hibiscus Slurpee, and Charleys Philly Steaks has a tangerine lemonade.

Just Salad has come out with a line of low-carb, high-protein wraps, Garbanzo Mediterranean Fresh has new light salads, and Baja Fresh has a burrito and bowl with both shrimp and wahoo.

Bolay Fresh Bold Kitchen, which has 27 restaurants, mostly in Florida, has a bunch of new bowls, and Eureka! has an eclectic array of new permanent additions to the menu

Sprinkles has a lunar new year-themed dessert, and MOD Pizza has a tiramisu one.

Starbird has truffle-flavored chicken, Sweet Chick has lemon-pepper chicken, and Taco Bell has brought back its wings in time for the Super Bowl again.

Zaxby’s Asian Zensation Salad is back, and now it has vegetable egg rolls, Tijuana Flats has new and returning flautas, Sweetgreen has a new dressing developed with an award winning barbecue chef, and Velvet Taco’s Weekly Taco Feature is a peanut butter burger in a flour tortilla.