Menu Tracker: New items from Taco Bell, Jack in the Box and Wingstop 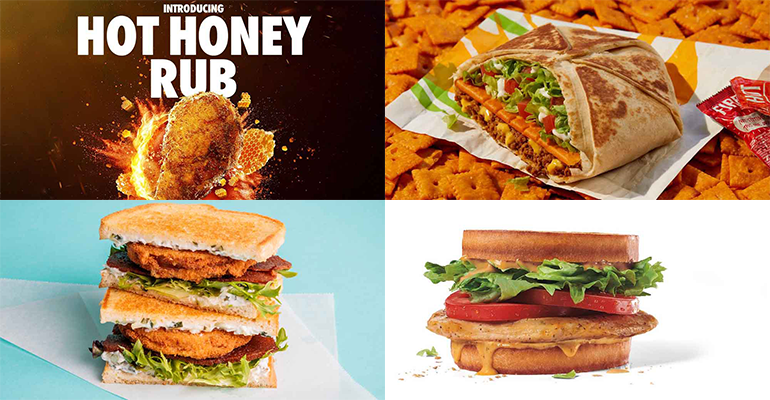 Independence Day weekend is upon us, and with it comes red, white and blue specials from Andy’s Frozen Custard and Ziggi’s Coffee, and Taco Cabana is marking the occasion with a cinnamon Margarita, but only in Texas.

Studio Movie Grill has its own agenda, and is celebrating the launch of two films, Nope and Minions: The Rise of Gru.

Other chains are focused on the summer and all that it implies, like barbecue — hence the baby back ribs highlighted at Velvet Taco and the pork ribs with blackberry sauce at Black Bear Diner.

There are a lot of strawberries on the menu, including items at Cowboy Chicken, Mellow Mushroom, Outback Steakhouse and Sonic Drive-In.

Taco Bell is testing items with a giant Cheez-It cracker, but only at one location in Irvine, Calif., but it has some national limited-time-offers, too.

Cinnabon has chocolate bons now, Jack in the Box has a grilled chicken sandwich, and Wingstop is featuring hot honey not as a sauce but as a rub.

White Castle is jumping on the bacon chicken ranch bandwagon (it’s a big wagon), Cotton Patch Cafe is on the habanero mango train, and Fosters Freeze is the latest chain to embrace bacon jam.

Tacodeli is responding to their guests’ habit of mixing horchata with cold brew coffee by making it an actual menu item.

Beyond Juicery is doing chicken Caesars, Native Foods has a BLT (but it’s a vegan restaurant, so the bacon is meatless), Joe & the Juice has matcha lattes and Abuelo’s has a watermelon Margarita.

Voodoo Doughnut has banana cream and Wayback Burgers has a new hot dog.