/sites/all/themes/penton_subtheme_nrn/images/logos/footer.png
Recent
Recent
Solutions to supply-chain woes shared at the National Restaurant Show
May 25, 2022
Flavor of the Week: Korean Barbecue
May 25, 2022
Strengthen Your Website’s Online Ordering Performance with On-Demand Delivery
May 25, 2022
5 food and beverage innovations at the restaurant show
May 25, 2022
Wow Bao launches one of the first loyalty programs in the virtual restaurant industry
May 24, 2022
Featured
Tech Tracker: Toast launches POS solution for quick-service restaurants
May 17, 2022
Memphis Seoul brings Korean BBQ and Southern cooking to Brooklyn
May 11, 2022
Executives on the move: 13 restaurant leaders with new positions in April
May 03, 2022
Zaxby’s names new development, digital-technology chiefs
May 24, 2022
Menu Tracker
brought to you by
Menu 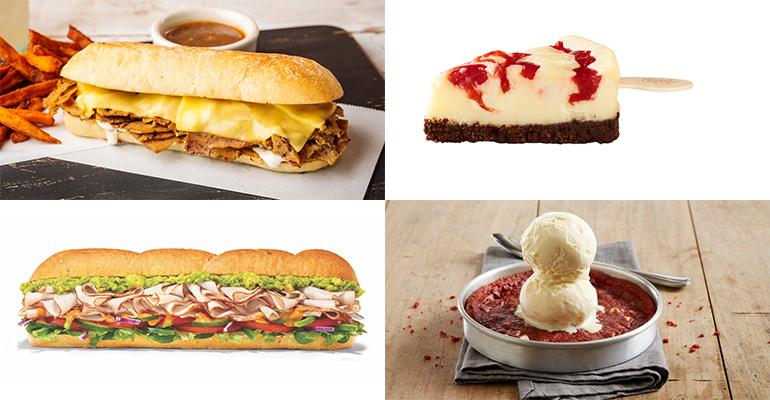 Or maybe the big news is the fact that White Castle isn’t celebrating Valentine’s Day in its restaurants this year. It does have a takeout meal for two in a cube-shaped pink box, but we don’t usually cover things like that in Menu Tracker (although we did at the height of the pandemic). However we do cover new desserts on a stick and White Castle has one of those.

Subway has a couple of new subs, BJ’s Restaurant and Brewhouse has the latest version of its signature Pizookie format, and P.F. Chang’s has a cocktail celebrating lunar new year.

Native Foods, a vegan concept, is trying its hand at a French dip, made with seitan, Taco Cabana has a new salad and Pie Five now has a pepperoni pizza drizzled with hot honey.