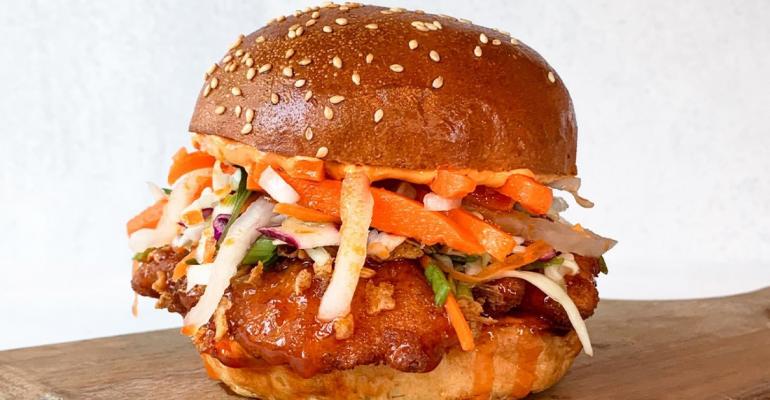 Kevin Miles, CEO of the Los Angeles-based fast-casual brand, said the refreshed look, which extends from signage and hats to cups and catering trays, was about a year and a half in the making. Besides uniforms and packaging, it also includes the brand’s website and ordering platform.

“About 18 months ago,” Miles said in an interview, “we started this journey of really doing a lot of research around the brand — speaking with customers and team members and even our vendors alike — to understand what they think of the brand.”

With a menu that had become more than half salad items and the introduction last year of grain bowls, the new branding more accurately reflects the fast-casual concept’s focus, he said.

“We had a great brand,” Miles said. “We wanted to continue through our roots and what the founders had put in and established in place in 2005.” Mario Del Pero and Ellen Chen founded the brand that year In Los Angeles. Miles was named CEO in July 2019.

The new look, based on an “Eat Happy” theme, is more an “evolution” of the brand, Miles said. Mendocino Farms’ research found that the menu, which has grown in the salads and grain bowls that now make up more than 50% of the menu, was hampered by the “sandwich market” signage, so that is being removed.

The signature Mendo the Cow is also getting updated.

“When Mario and Ellen opened Mendo in 2005,” Miles explained, “they were down in kind of a basement of a tower in downtown L.A.” They introduced the cow to gain notice, and it is now getting a design refresh.

“Messaging inside our restaurants will be more directional and more intentional,” he said. “You'll also see it in our website. We'll do a new website design, new app everything like that.” About 20% of Mendocino Farms’ sales are catering and more than 60% is off-premises, Miles said.

The font color on the Mendocino Farms logo has changed to a darker blue, and the palette of colors on the interior include more earth tones, Miles said.

The company said the new look will roll out over the next year at existing and new locations.

The company plans to open 11 to 13 units this year, Miles said, and is working on a third state of Georgia, with Atlanta on the brand’s expansion list.

Supply-chain issues have been most felt on the kitchen equipment side of Mendocino Farms’ expansion, Miles said, with slight delays. Refrigeration has been the biggest category of pressure, he added.

Commodities have been less of a difficulty, he added. The brand will be rolling out a new menu with the brand refresh.

“This new Thai chicken sandwiches that's coming out is probably my new favorite,” he said.  it's fantastic. It's got a little bit of that sweet heat inspired by Thailand. … it's not your traditional fried chicken sandwich. We air-fry it, and it's really, really good.”

Other new menu items, available at Texas locations, include a Thai Mango Salad with roasted chicken and ramen noodles and a Flat Top Smoked Brisket Sandwich.

The brand has 42 locations in California and Texas, including two delivery-only locations, the most recent of which opened in Oakland, Calif., in October 2021.