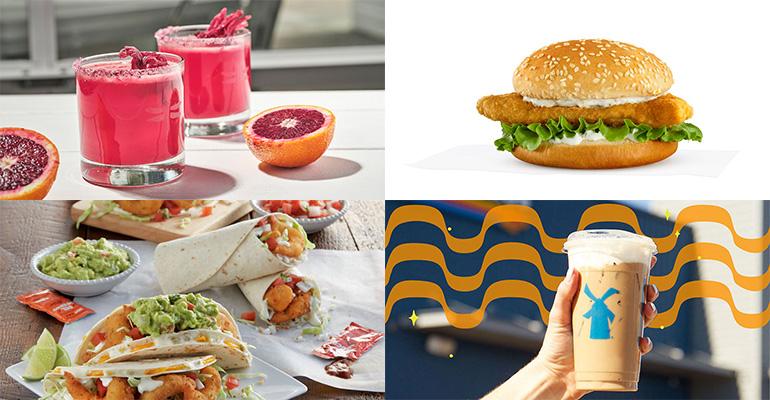 But of course preceding Lent is Mardi Gras, which is reason enough for chains to roll out New Orleans-themed menu items, even though the first Mardi Gras celebration in the United States was actually in Mobile, Ala., and Fat Tuesday/Carnival is widely celebrated in Catholic communities across the world.

But no matter. Specials inspired by The Big Easy can be had The Toasted Yolk Cafe, an 18-unit chain out of Houston and, again, at Velvet Taco.

Portillo’s actually has a fish sandwich all year long, but it is rolling out a breakfast option for people not eating meat — an egg sandwich made with its signature peppers.

Not really related to Lent, but interesting nonetheless, some chains are taking the plant-based protein route to offering food without meat, including Dog Haus, Flip’d by IHOP and Fuddruckers (or rather the 14 locations operated by franchisee Black Titan Holdings). Cafe Gratitude is a vegan chain out of Southern California that has rolled out a bunch of brunch items.

It is a somewhat odd fact that arguably the most debauched holiday in America, St. Patrick’s Day, always falls during Lent. In fact archdioceses with large Irish-American populations, such as New York City and Boston, routinely issue plenary indulgences clearing its parishioners to break the rules of Lent for the day, and Duck Donuts, Bruster’s Real Ice Cream and PDQ are marking the holiday with green menu items.

Sprinkles is marking Women’s History Month with a collab with chef Brooke Williamson.

Bartaco is continuing its five-week celebration of Margaritas, Clean Juice has new slushie-like drinks made with frozen fruit, Jimmy John’s has a new turkey club and Zaxby’s has upgraded its chicken club.

Starbucks has a new shaken espresso as a permanent addition to its menu, Dutch Bros has a new cold brew coffee with orange and Ziggi’s Coffee has a spicy mocha.

Buona, an old-school chain offering Chicago-style Italian beef, has two new sandwiches — one with more cheese and one with marinara sauce.

Johnny Rockets has milkshakes with breakfast cereal in them.

Papa Murphy’s has new Buffalo ranch chicken items and Pizza Guys has a garlicky white pizza with pepperoni and spinach.

Studio Movie Grill is celebrating The Batman with special drinks, Torchy’s Tacos has a taco with chicken and waffles in it, and Sonic Drive-In has a burger with extra bacon.

This gallery has been updated with clarification about the differences between the fish sandwiches at Carl's Jr. and Hardee's. An error in the name of the Caramel Coconut Cookie ice cream at Bruster's Real Ice Cream has been corrected. The availability of Fuddruckers' plant-based items has also been corrected.
Start Slideshow ›
TAGS: Quick Service Fast Casual Casual Dining
0 comments
Hide comments
Related
Sponsored