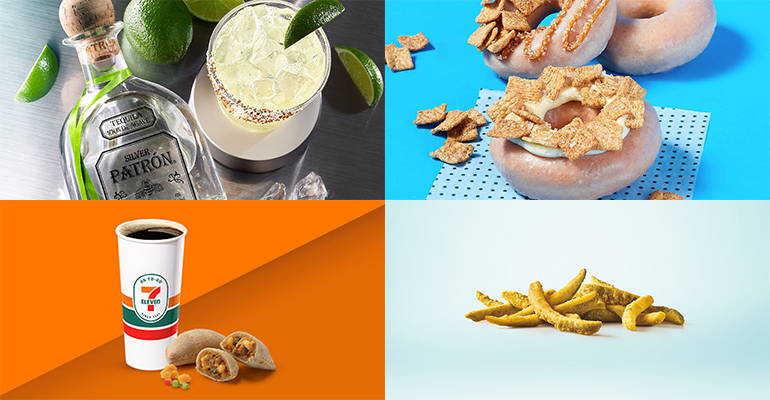 Berry season is upon us, as we can see with new menu items from Bob Evans, Cousins Subs, Lucille’s Smokehouse Bar-B-Que, Wings & Rings and Tous Les Jours (although Tous Les Jours’ strawberry items are permanent additions to the menu)

Sonic Drive-In had something of a hit a few years ago with pickle juice slushes. Now it’s bringing pickles back, but a bit more moderately, with a pickle-heavy burger as well as fried pickled spears.

Krispy Kreme has a new glaze made with Cinnamon Toast Crunch cereal, and Great American Cookies has snickerdoodles topped with caramel corn.

Barberitos has a new brand ambassador, Georgia Bulldog star Jordan Davis, and is celebrating that fact for the rest of the year with a burrito named after him that pretty much just has double of everything.

Speaking of burritos, TacoTime has burritos stuffed with Impossible Burger and Bubbakoo’s Burritos is offering a spicy new sauce to its guests.

Pei Wei is celebrating Cinco de Mayo with the return of its Mongolian Chicken Nachos, Chili’s monthly Margarita is made with Patrón and 7-Eleven has miniature empanadas.

Jinya Ramen Bar has a bowl co-branded with the HBO Max series Tokyo Vice, North Italia and Urban Plates have a bunch of seasonal items and Velvet Taco’s Weekly Taco Feature is inspired by orange chicken.