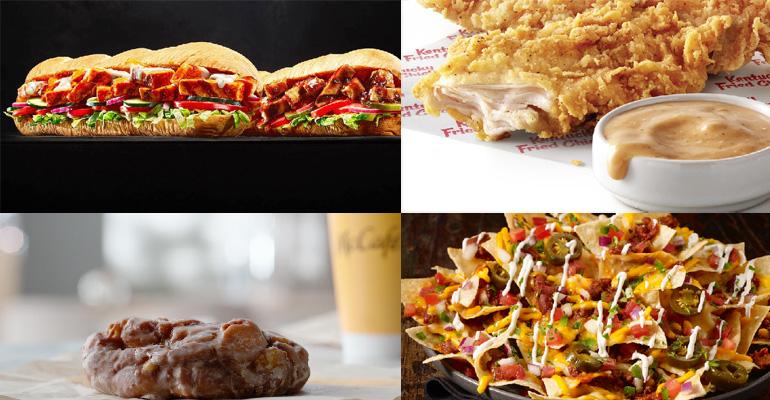 You might be tired of all the new pumpkin spice menu items, but Taco Cabana isn’t: That chain is now offering a Pumpkin Spice Margarita.

McDonald’s is expanding its core pastry line for the first time since 2012, and KFC has revamped its core sauce offerings including a new tangy-smoky KFC Sauce.

Both Del Taco and Qdoba have teamed up with Cholula Hot Sauce to create new menu items, while Subway has a new chicken sandwich featuring Frank’s Red Hot sauce.

Taco John’s is testing some fitness-oriented bowls in the upper Midwest, and Daphne’s has a new vegan Power Bowl.

Hard Rock Cafe has a bunch of new family meal bundles, Eggs Up Grill has new brunch items, and Juice it Up! has an horchata smoothie.

Killer Burger, having scored a fresh supply of green chiles, is bringing back its José Mendoza Burger, and MOD Pizza is using Calabrian chiles for its latest limited-time pie, the Viviana.

Just Salad is featuring its newest ingredient, manchego cheese, in The Catalan, Vitality Bowls has an Apple Pie Bowl and Yogurtland has a frozen treat made with cold brew coffee.

Torchy’s Tacos’ monthly special is election themed and has pulled pork, and Velvet Taco’s weekly taco feature is made with flank steak and chimichurri.