/sites/all/themes/penton_subtheme_nrn/images/logos/footer.png
Recent
Recent
The third-largest pizza chain is ready for a war
Dec 02, 2022
DoorDash’s layoffs are not a time to panic: they’re a time to rethink the delivery industry
Dec 01, 2022
How Checkers & Rally's plans to adjust as other brands adopt its double drive-thru model
Dec 01, 2022
How a local grain became the star ingredient of the stand-out pita at Gavin Kaysen’s latest restaurant
Dec 01, 2022
Subway is serving footlong cookie ‘subs’ for only one day
Nov 30, 2022
Featured
How 21 restaurant companies performed in their most recent quarters
Nov 22, 2022
How eco-friendly Seattle restaurant chain Just Poke is doubling in size in 2022
Nov 17, 2022
In the Mix this week: White Castle’s culture, a CREATE recap, Denver’s restaurant scene and more
Oct 27, 2022
How this emerging brand is planning on nearly quadrupling in size in just one year
Oct 21, 2022
Menu Tracker
brought to you by
Menu 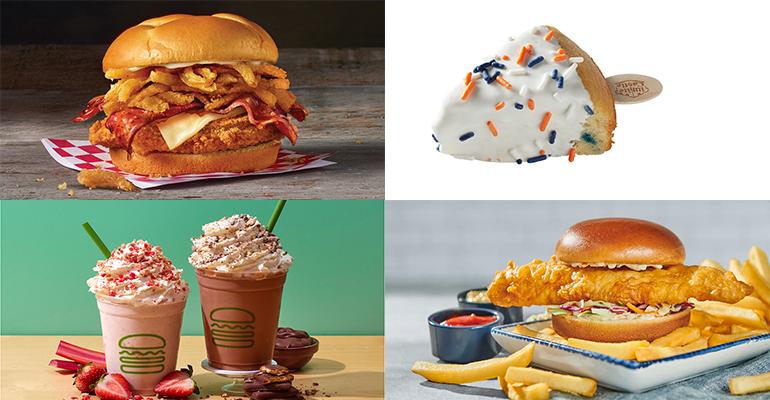 More than 50% of IHOP guests order bacon, so the family-dining chain has launched a limited-time premium bacon that’s around a quarter-of-an-inch thick, along with a new BLT and other items featuring the new ingredient. And while it’s at it, it’s adding candied versions of its regular bacon to pancakes, milkshakes, a sundae and more.

Is bacon in a sundae unusual? Sure, but Voodoo Doughnut is offering a doughnut inspired by a ramen bowl, available through April 20.

Jack in the Box is combining fried chicken with a cheddar biscuit, and also offering a 50/50 combination of spicy and “classic” popcorn chicken.

Red Lobster has a fried chicken sandwich now, because of course it does, but the chicken-sandwich innovation award goes to Nathan’s Famous, which has two sandwiches made from thigh meat.

In other pretty big news, Jamba has breakfast sandwiches now.

Farmer Boys has vanilla cold brew coffee, Rib & Chop House has a new flaming cocktail, Pie Hole has new pies and Tropical Smoothie Cafe has a new smoothie, but only in Atlanta.