Menu Tracker: New items from Denny’s, Dunkin’ and Jack in the Box 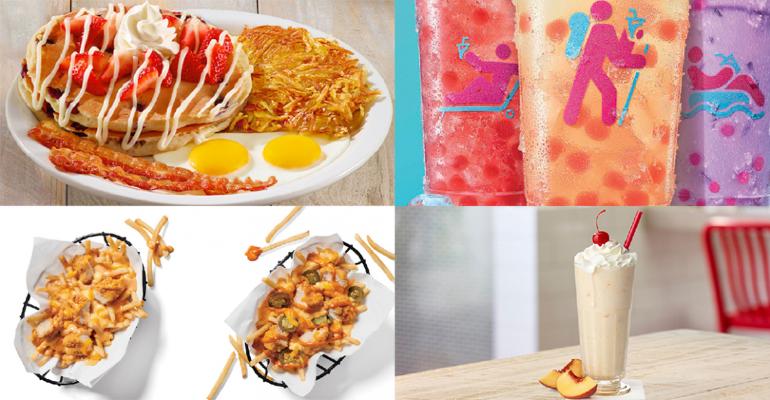 Last summer, Dunkin’ tested a variety of specialty drinks, including some containing little strawberry-flavored balls that burst in your mouth. Now those Popping Bubbles are available systemwide to be added to drinks for around 70 cents.

Dunkin’s sister brand, Baskin-Robbins, has some new special cakes for Father’s Day, including one shaped like a beer mug that it’s bringing back from previous years.

That’s just one of the chains that are bringing back favorites. Chick-fil-A’s peach milkshake, introduced in 2009, is back for the summer, and so are Denny’s Pancake Puppies, Farmer Boys Chicken Caesar Salad and Hog Heaven Breakfast Burrito, and Snarf’s Sandwiches’ Cubano.

Chicken Salad Chick has a new chicken salad: Pam’s Parmesan Caesar, named for Pam Ashley, the general manager of a unit in Augusta, Ga., who passed away from cancer. Ten percent of sales of the sandwich from company locations through July 15 will go to the Chicken Salad Chick Foundation for cancer research.

PDQ’s new sandwich made in collaboration with 4 Rivers Smokehouse also has a charitable component, with a portion of sales going to 4Roots, an organization seeking to foster a better food system in the Orlando, Fla., area, and Piada Italian Street Food’s new Acqua Fresca, which draws from honey and melon from local farms, is donating 10% of sales to LGBTQ support organization GLSEN through July.

Old Chicago has rolled out Detroit-style pizza and Pizza Guys has a new Mediterranean pizza.

Rusty Bucket has a bunch of new cocktails and Pollo Tropical has its first ready-to-drink cocktail under their own brand, La Palmita Cocktail Co.

Movie star Ryan Reynolds wins twice at Studio Movie Grill, which is showing his new film and selling a cocktail made with his gin.

TGI Fridays has a new cocktail that’s supposed to boost your immunity, and Tim Hortons has two new fruity drinks for the summer.

Johnny Rockets is 35 years old this summer, and is celebrating with a milkshake, Ocean Prime has seasonal halibut, and at Yoshinoya you can now top any bowl with sliced avocado.