/sites/all/themes/penton_subtheme_nrn/images/logos/footer.png
Recent
Recent
Chicago restaurant trailblazer Rohini Dey discusses the power of food to make change
Sep 29, 2022
How Starbucks is handling unions under new control
Sep 29, 2022
An inside look at CREATE: The Future of Foodservice
Sep 28, 2022
Subway offers ‘Souped Up’ weekend deals
Sep 28, 2022
Starbucks and its union are finally ready to negotiate
Sep 28, 2022
Featured
Menu Tracker: New items from Chipotle, Schlotzsky’s and Shake Shack
Sep 16, 2022
How marijuana themed sandwich chain Cheba Hut creates a vibe embraced by all
Aug 25, 2022
Mike Rypka, founder and CEO of Torchy’s Tacos, on the chain’s brand, which is just a little bit ‘trashy’
Sep 07, 2022
How a viral country song and broad-based campaigns boosted Applebee’s and IHOP
Sep 12, 2022
Menu Tracker
brought to you by
Menu 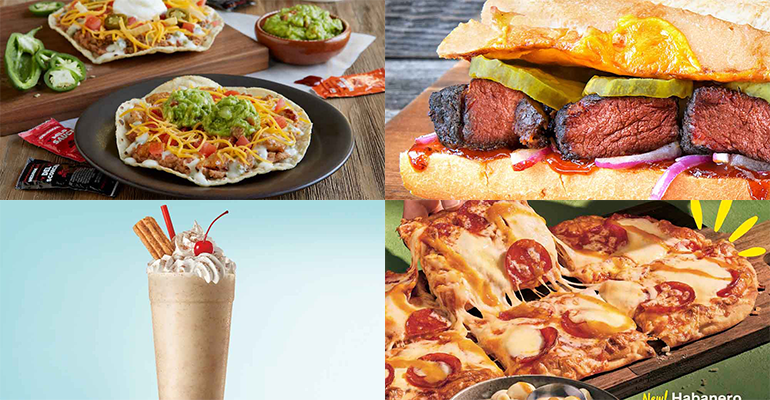 If you happen to be at select Panera locations in Miami, you can order your food in “Ludicrous Mode,” which means adding a side of habanero hot sauce from Yellowbird, which Panera says is the top-selling hot sauce brand at Whole Foods Market and on Amazon. So the fast-casual chain is seeing how its customers like it.

Del Taco has some new crispy items in its Crunchtada line, plus a milkshake with M&Ms in it, and Sonic Drive-In is selling churros and bringing back Bursting Bubbles, its response to the boba tea movement that it tested last year.

Quiznos has a new burnt ends sandwich, and Roy Rogers isn’t letting the Sriracha sauce shortage stop it from rolling out a chicken sandwich with that flavor; it’s using Heinz Honeyracha Sauce.

Studio Movie Grill, in celebration of the release of the film Bullet Train, starring Brad Pitt, is offering a cocktail made with Pitt’s own Enroot tea — a win-win for the celebrity.

Rusty Taco has a spicy Margarita, and Dog Haus’s latest collab is with YouTube personality Sam “the Cooking Guy” Zien.

Velvet Taco’s Weekly Taco Feature has Hawaiian poke, and North Italia has rolled out seasonal cocktails, the actual contents of which varies by region (except for Florida and Atlanta, where only the name is different).

We’re also hearing from some smaller chain’s this week, such as Apóla, which two units in Orange County, Calif., and a new baklava cheesecake, three-unit Chick N Max out of Wichita which has a new Cajun-inspired sandwich, and Tiki Docks, a Tampa-based, Polynesian influenced concept, has launched a dozen new items.

The Salty Donut has two collabs with restaurants in two cities, Sweet Chick, in another collab, is selling chocolate banana pancakes at three locations and Farmer Boys is selling floats at its Gilbert, Ariz., location to raise money for Phoenix Children’s Hospital.