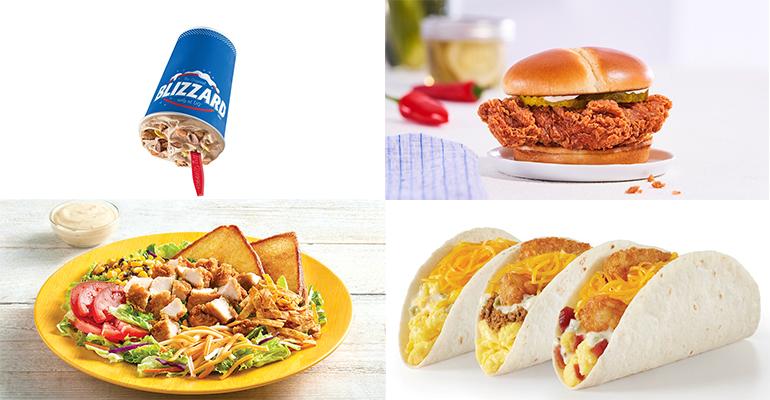 It’s a fairly slow week for menu innovation at the larger chains (Popeye’s would beg to differ as they rolled out their chicken nuggets this week, but we reported on that two weeks ago), so we have the bandwidth to look at some smaller restaurant concepts, such as Sweet Chick, a chicken-and-waffle place based in Brooklyn, N.Y., that has a new peachy cocktail, and Pinkbox Doughnuts in Las Vegas, which has peachy doughnuts, among other new items. Sweet Paris Crêperie out of Houston has a line of drinks inspired by the French Riviera.

Pure Green has new oatmeal and toast options, I Heart Mac & Cheese has cheesecake bites and Pasqually’s, the virtual brand of Chuck E. Cheese, has a new pork-heavy pizza with Korean barbecue sauce.

Cicis also specializes in pizza, but it now is offering jalapeño and pepperoni poppers, and Taco John’s, which specializes in tacos, now has cold brew coffee.

Zaxby’s has a new salad, which it calls a zalad, and Velvet Taco’s Weekly Taco Feature has pork belly al pastor.

Some pretty large chains are innovating this week, such as Del Taco, which is expanding on its taco expertise with new breakfast versions, Jack in the Box, which has announced plans for a spicy version of its Tiny Tacos, and Bojangles, a fried chicken expert, that has a new sandwich.

This gallery has been updated with Jack in the Box's new Spicy Tiny Tacos and details about the herbs in Le Pain Quotidien's herb aïoli. It has also been updated to clarify that the prices of Pasqually's new items are approximate. A typographical error in the introduction has also been corrected.
Start Slideshow ›
TAGS: Fast Casual Quick Service Casual Dining
0 comments
Hide comments
Related
Sponsored