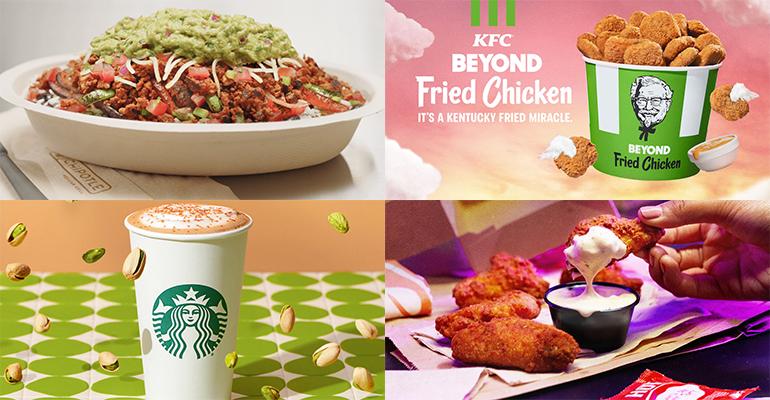 As a reporter, it’s hard to get health clubs to tell you how long all the new members who join as part of their new year’s resolutions actually show up: It’s bad press to say that few of those aspiring marathon runners and bodybuilders will come close to achieving their goals.

But this reporter joined a health club in September and asked the manager.

“Just through January,” he said.

Nonetheless, January is a time for new beginnings, or at least the hope for them, for many consumers and many chains are eager to help with new menu items intended to suit the goals of their guests.

Hence the new salads at El Pollo Loco, the nutrient-dense pancakes at First Watch, the lighter flatbread pizzas at Hungry Howie’s, the lower-sugar drinks at The Coffee Bean & Tea Leaf, the Vida Bowls at Luna Grill, the LEANguini in test at certain Noodles & Company locations and the new energy boosting, workout recovery enhancing and detoxifying beverages at Jamba, Juice It Up! and Smoothie King.

Plant-based proteins aren’t necessarily better for health, particularly if they’re breaded and fried, but they might be better for the environment — although that argument holds more weight as a beef or dairy  replacement rather than as one for pork, poultry or seafood.

Nonetheless, a bunch of new meat and dairy replacements are on offer, most notably the national rollouts (albeit for a limited time) by Chipotle Mexican Grill and KFC of plant-based chorizo and fried chicken, respectively. But there are also new animal-free items from Blaze Pizza, Cold Stone Creamery, Donatos and Yogurtland.

Cinnaholic and Veggie Grill also have new vegan items, but they’re vegan concepts, so you’d have to expect that.

On the other hand, Taco Bell saw fit to introduce fried chicken wings as an LTO, The Habit Burger Grill has brought back its patty melt, White Castle is reprising its Sloppy Joe — and also adding new Smoky Joe and Sloppy Fries options — Frisch’s Big Boy has new half-pound burgers, I Heart Mac & Cheese is now putting its signature item into tacos, Chili’s Margarita of the Month has three different types of tequila, Whataburger has brought back its Dr. Pepper Shake and Jack’s Family Restaurants are highlighting fried bologna.

Joella’s Hot Chicken has new, smaller sandwiches, but it’s marketing them as a convenience play rather than a low-calorie one.

Barberitos has new pulled pork, Modern Market has announced its winter LTO lineup, Starbucks is bringing back its Pistachio Latte, Wayback Burgers has new spicy items, Peet’s Coffee is working a churro theme, Scooter’s Coffee has jumped on the cold foam bandwagon and Voodoo Doughnut has four new items, one of which is a riff on a Pop-Tart and another from which some of the proceeds are going to fight Alzheimer’s disease.