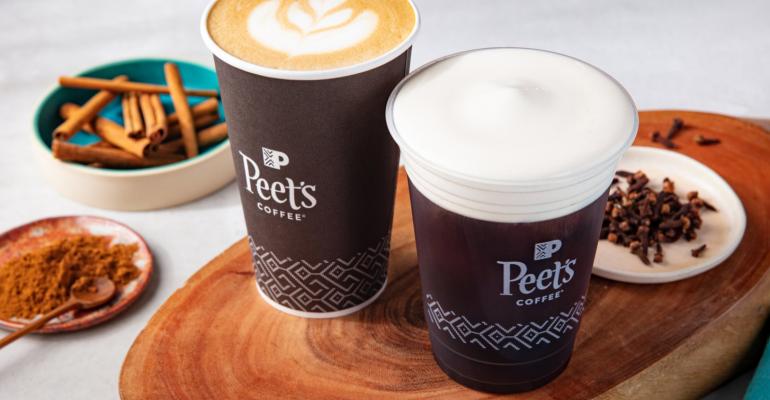 Steamed frothy milk has been a popular accompaniment to coffee for decades, but now cold versions — some made with dairy, some with dairy alternatives — are being spooned over cold beverages, adding richness and texture to tea beverages as well as coffee.

First introduced nationally by Starbucks in 2018 as “cold foam,” this beverage enhancement has spread recently, with Dunkin’, Jamba and other brands rolling out their versions this year.

The Starbucks version is made with aerated nonfat milk and was first introduced at its Reserve Roastery in Seattle in 2014. It was then expanded to other Starbucks Reserve locations before being rolled out nationwide in April of 2018, according to a Starbucks spokesperson.

Since then, it has been modified seasonally with the additions of pumpkin spice and Irish cream flavoring.

“Of note, Pumpkin Cream Cold Brew has become one of the most popular seasonal cold beverages of all time, with more than 90 million beverages sold in the U.S. as of [the fourth quarter of 2020],” the spokesperson said, adding that the cold drink outsold Pumpkin Spice Lattes last year.

Although that might come as a surprise, cold beverages actually accounted for 74% of total domestic beverage sales in the most recent quarter — a new record and up by 10 percentage points over the past two years, the spokesperson said.

This pumpkin spice season, Seattle-based Starbucks added Pumpkin Cream Cold foam as an option on its app, and customers have responding by adding it to their iced chai lattes, iced white chocolate mocha and iced lattes.

Although Starbucks was the first chain to introduce cold foam nationally, it has been available in the United States at Taiwanese bubble tea concept Gong Cha since 2014, said Anchal Lamba, one of the chain’s master franchisees, who operates 69 locations in New York City, New Jersey, Massachusetts and Texas.

Gong Cha’s foam is made with milk, sugar, a hint of sea salt and other proprietary ingredients and whipped using a conventional mixer each day. It’s stored refrigerated and quickly re-whipped for each order.

“It’s the perfect combination of sweet and savory,” Lamba said.

That salty element speaks to another of the origins of cold foam. Although a clear descendant of steamed milk, it also owes its origins to cheese tea, an invention that probably originated in Taiwan and is made with cream cheese that has been thinned with water or milk and then sometimes sweetened or salted, or both, and spooned over iced tea. It started to pop up in recent years in Chinatowns across the country as well as in Las Vegas, according to S&D Coffee and Tea, which featured it at its National Restaurant Show exhibit in 2018.

Peet’s version is vegan, made with oat milk, flavored syrup and proprietary frappe base, which Main said is similar to the gum syrup used by bartenders. That’s all loaded into a whipped cream dispenser charged with nitrous oxide and dispensed over the chain’s Baridi Blend cold brew and ice. Seasonal variations include a pumpkin oat foam, which is available now, “and it has outperformed our sales projections by an almost startling margin,” he said.

“I think that part of the popularity of our oat foam is that it is sweet and flavorful and feels indulgent, but it doesn’t really break the bank nutritionally,” Main said. “Because we dispense it on top of unsweetened cold brew, our 16-ounce serving of Pumpkin Oat Foam Cold Brew has only around 60 calories — not bad for a sweet treat that really delivers on the fall flavors that people crave this time of year. Plus, cold foams are just fun. The best way to drink them is without a straw, sipping the cold brew through the foam so that you get the full range of flavor and texture.”

Dutch Bros Coffee also has its version of cold foam called a Soft Top, which was introduced in March of 2020 at the same time the company launched its White Chocolate Lavender Cold Brew.

“It’s fluffy,” said senior product manager Listel Bjork. “It holds its texture so nicely that it slowly seeps into the drinks and you get this really delicious, almost vanilla-like sweetness. It’s like if marshmallow was not congealed.”

Anh-Dao Kefor, director of brand marketing for Dunkin’, has similar observations about that brand’s cold foam.

“Made from nonfat milk, sugar and cream, the sweet cold foam gradually blends into the cold brew [coffee], adding even more flavor, texture and richness to every sip,” Kefor said in an email, noting that it was rolled out in February of this year. Since then, the brand has introduced a version topped with cinnamon sugar as well as a pumpkin spice version.

PJ’s Coffee added a sweetened version of its cold foam in May of this year to go with its Wedding Cake Cold Brew, which has vanilla and almond flavors. It’s made with equal amounts of whipping cream and whole milk as well as vanilla syrup shaken and dispensed via whipped cream cannister.

Similar to Peet’s, Jamba made a vegan foam for its drinks. It’s made with whipped oat milk, coconut milk and agave syrup and was introduced this summer along with its new coffee and tea lines, according to executive chef Mark Gabrovic.

“Our guests … love to see how it cascades into the iced beverage, creating an experience that is both delicious and ‘Insta-worthy,’” Gabrovic said in an email.

“We also loved how the sweet, creaminess of our sweet cloud whip foam topper balances the flavor of our cold brew and matcha with its sweet, creamy and airy flavor.”