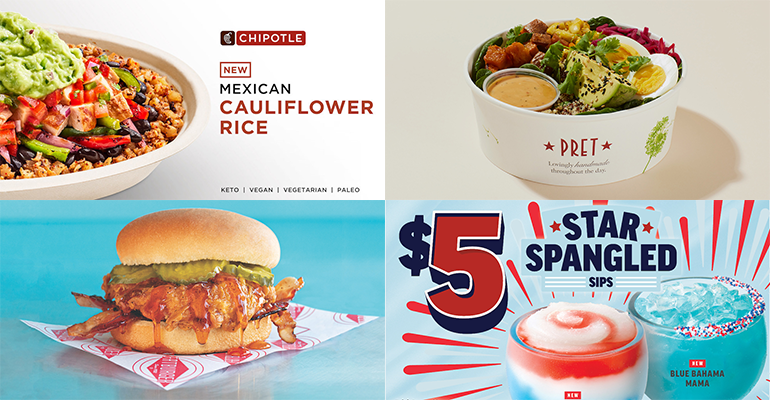 If you live near one of 60 special Chipotle Mexican Grill locations in Arizona, Southern California or Wisconsin, you can try the chain’s new Mexican Cauliflower Rice, which is like the cauliflower rice (technically not rice at all but riced cauliflower, as you probably know) that the chain introduced last year, but spiced differently.

Wings & Rings also has cauliflower that the chain calls something else — cauliflower “wings,” even though we all know that cauliflower can’t fly. They’re not new, but they have a new dry rub developed by Marco, who is the manager of the King Mills, Ohio, Wings & Rings.

Slim Chickens has three new rubs not named after anyone.

Urban Plates now has a burger, and there are new burgers at Dave & Buster’s, Freddy’s, Taziki’s, Taco Bueno and Wild Wing Café.

The Habit Burger Grill has a grilled peach salad and Fatburger has a new chicken sandwich.

The Human Bean has new flavored tea-based “Refreshers” with trendy ingredients, but no watermelon.

Applebee’s has some new Independence Day-themed cocktails, Häagen-Dazs has a new sundae, Lion’s Choice has a lemon milkshake and Main Event has cookie-themed ones.

Jimmy John’s has a new wrap (and is bringing back an old one),

Pret à Manger has a whole new summertime lineup, and Hurricane Grill & Wings has some new seasonal items, too.

Tous Les Jours has some new coffee drinks and a mocha cake, Taco John’s has a barbecue chicken taco and Velvet Taco is continuing its run of salad-themed Weekly Taco Features, this one with salmon.